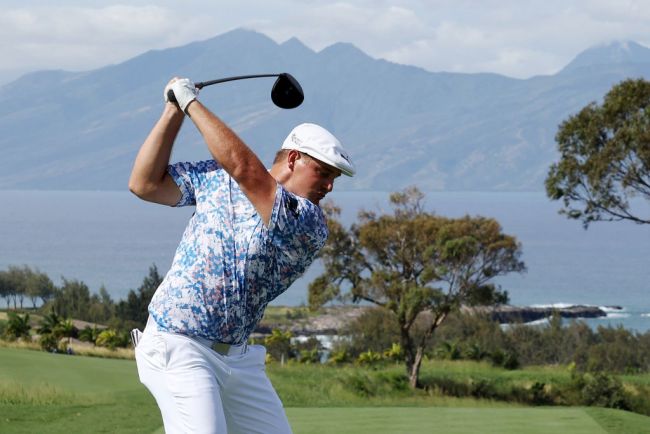 As his continued quest to become the longest driver on the PGA Tour, Bryson DeChambeau spent the off-season training with World Long Drive champion Kyle Berkshire with hopes of improving his ball speed. The US Open champion already tops Tour standings for average ball speed with his driver, but wants to get even faster. He really pushed himself and his body to the limit.

“A lot of it has to do with pushing the limits of your body and going for long hours of swinging your golf club with a golf ball and trying to help up the ball speed,” DeChambeau said about what Berkshire taught him.

He also asked his long-drive mentor about how far he should be pushing his body during training and the answer was extreme. Berkshire said that he goes until he blacks out.

DeChambeau said that he never reached a full blackout but said that they both were close to reaching that point “numerous times.”

“There was times where I was seeing a tunnel and I had to stop,” he said. “I mean, you just have to stop. That’s about when you stop. There’s a lot to it.”

It doesn’t seem healthy at all. But neither does the diet he was maintaining during and out of quarantine in late spring/early summer.

“I would say that in the mornings I usually have four eggs, five pieces of bacon, some toast and two protein shakes,”

After that, I’m snacking when I’m practicing after. Go back to the hotel, eat a dinner, steak, potatoes. Then—and I’ll have two protein shakes with it there as well. So I’m consuming around, I’d say, around six to seven of those protein shakes a day now where I used to be two or three. With the weight up, I just had to consume a lot more. Luckily, I like the taste of those shakes so I can take those pretty easily.”

While DeChambeau’s training might seem overwhelming to most, he enjoys reaching the extremes of what the human body can do.

“I spent my off-season swinging my butt off as hard as I can,” he said. “There were times where everything hurt in my body and it was breaking down my whole nervous system and rebuilding it back up. I like doing that. It’s fun testing the limits of my body and seeing what I can and can’t do.”

He has made it work for him and his regimen has been nothing but productive in his goals thus far. He recorded a ball speed of 211 mph on the range earlier this week, but has yet to record over 200 mph during a competitive round. That is the next benchmark before he dives into the science and physicality around the rest of his game.

“I’m going to keep getting speed until I try and get around 205 to 210, in that range,” DeChambeau added. “Once I achieve those speeds and I’m comfortable with that, not trying to swing my butt off, it just happens naturally, that’s when I’ll probably stop and go down the chipping rabbit hole and try and understand my chipping and wedging a lot bit better.

He was in the top 15 at the Tournament of Champions event on Friday night, nearing the end of the second round from Kapalua Plantation Course.