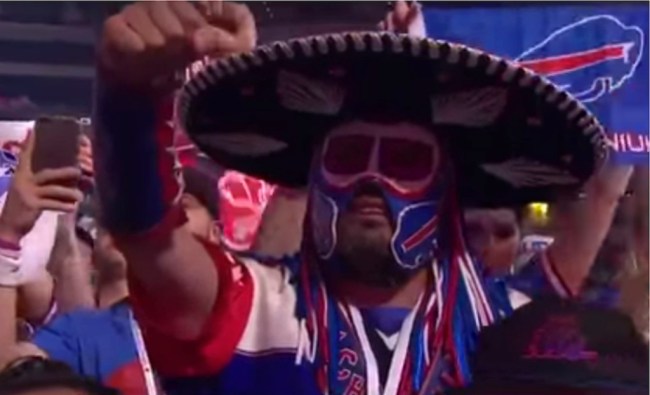 The Buffalo Bills are having a laughable season. Owning a record of 2-7, the team’s so bad that sports fans are wondering whether or not they could survive a game against college football’s Alabama Crimson Tide in a imaginary matchup. With a quarterback in Nathan Peterman getting tons of criticism and embarrassing play on the field, there’s not much to look forward to up in Buffalo.

Unless, of course, your name’s Ezra Castro, a diehard Buffalo Bills super fan who is more commonly known as Pancho Billa. You see, Castro is fighting stage 4 cancer and says that it’s his passion about the Bills that has helped him stay positive through the unfortunate process. As a Mexican immigrant, Ezra was hoping to find a team with red, white and green colors of his home nation’s flag, but ended up rooting for the Bills because of their red, white and blue colors, which match the American flag.

Once his story got out, the Bills organization pulled an awesome move by inviting Ezra Castro to announce the Bills’ third-round pick in this past NFL Draft. But the team went even further this weekend, as they had Pancho Billa deliver a pregame speech to the entire team last night before their game against the New York Jets today. Here’s a little warning, it’s going to make your eyes swell up.

He's an inspiration to so many and it's a moment we'll never forget.

Man, this is just another reason why sports is so awesome. Even though the Buffalo Bills are down in the dumps and people are mocking their play, a diehard fan like Ezra Castro keeps the faith and looks at them as a positive influence on his life. It’s so damn cool.

CBS Sports also did a more in-depth feature on Ezra, so you might want to check that out, too, if you want to continue letting a few tears roll down your face this morning.

To Ezra Castro, a.k.a Pancho Billa, the @buffalobills are more than a team, they are family. Even while he battles cancer, there’s nothing that can keep him away from his family. pic.twitter.com/NGIDCw7xIT

After hearing his story, you can help donate to the fundraising campaign for Ezra Castro here, which is to help to offset the cost of Castro’s cancer treatment, which has reached about $30,000. This guy keeps the positivity and should inspire us, so kudos to him, here’s to a full recovery to kick cancer’s ass.