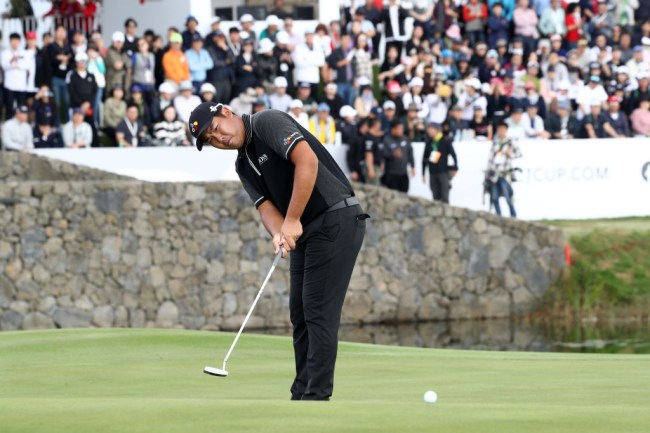 Four putting has been a topic of conversation recently after Tiger Woods did so at Riviera last Saturday at The Genesis Invitational. In fact, it was the second time this season we’ve seen Woods four-putt as he also pulled off the difficult feat at The Farmers Insurance Open.

Whether it’s Woods or any of the players on Tour, it’s always shocking when we see a four-putt, but what we saw from Byeon Hun An during the opening round of the WGC-Mexico Championship on Thursday was next-level.

An, the No. 50 player in the world, started his round in an ideal way by hammering a 312-yard drive onto the green giving him a chance for an eagle right out of the gate.

He did not make eagle.

An ran his first putt by the hole leaving himself a two and a half footer for birdie, you know, easy clean up to get the round going on the right foot. Nope, that didn’t happen either as he missed the birdie putt leaving another short putt for a frustrating par.

It turns out par wasn’t in the plans either as An managed to miss another two and a half footer before ultimately tapping in for bogey.

The four-putt is brutal, but what’s even worse is that he three-putted from inside three feet when it was all said and done.

Shot tracker can be pretty iffy at times, but seeing that An is thru 10 holes at the time of this post being published it has to be legit.

The putter has never been a friend to An who is still chasing his first PGA Tour win after losing in after falling in playoffs twice in his career, but this particular instance is beyond out of character.

An entered the week ranked 194th on Tour in strokes gained: putting and 156th in putting from three feet, so perhaps it was just a matter of time before we got a four-putt out of the 28-year-old.