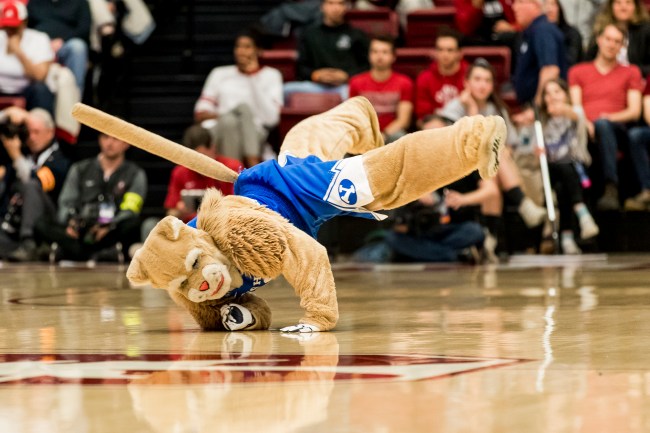 True story: I haven’t watched a BYU basketball game outside of March Madness at any point in my entire life. That might change for me after seeing this clip.

BYU’s mascot, Cosmo the Cougar, was launched by four dudes from the 3-point line and catapulted into outer space before throwing down what’s probably the greatest slamdunk I’ve seen since Space Jam. Sure, this is a trick play but it’s unlike anything we’ve seen before.

Also, Twitter user @ericwatso9 managed to capture this outrageous move in slow motion so the clip is 1000x more dramatic. And I’m not even exaggerating when I say I can’t stop watching this clip. I came across it last night on Twitter and have watched it at least twenty more times since then.

He was thrown 22-feet laterally and at least 15 feet into the air. Straight up insanity. Check it out from every angle. The first clip is the one on slow-mo:

This has BLOWN UP. A lot have asked for it in real time, so here you go! @byu_cosmo #BYU pic.twitter.com/NCxUZQWVYc

Me jumping to conclusions. pic.twitter.com/6f7VrPs5aK

I’m almost certain a thousand people have probablys aid this over the weekend but the NBA needs to consider allowing something like this in the All-Star Weekend NBA Dunk Contest because that was more thrilling than anything I’ve ever seen in the Dunk Contest.

The BYU Cougars are currently 19-7 on the season and in 2nd place in the WCC, 3 games behind Gonzaga who are 25-1 on the season so far. I have managed to watch some Gonzaga so far this season and they look borderline unbeatable on certain nights.