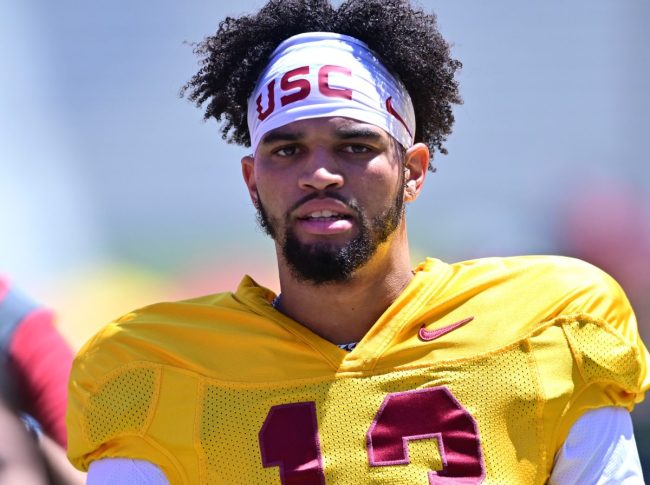 QB Caleb Williams is refuting a recent report that says Oklahoma fans were the reason for his transfer to Southern Cal. In an interview, Williams’s dad stated that there were things that the school and its supporters did to drive the star passer away.

Williams entered his name into the transfer portal after his head coach, Lincoln Riley, decided to leave for USC. His father says that the Sooner fans’ immediate response helped push him to the West Coast. A return to Oklahoma was supposedly at the top of the list despite his entering the portal.

But when it came time to make a decision, Williams ultimately followed Riley to play for the Trojans. However, the quarterback denies that the fans were the reason for his leaving.

In fact, he says it’s quite the contrary.

Williams commented on a recent Twitter post to tell the world that the OU fans almost got him to stay.

Wanna take this done? The fans and my old teammates are the reason on y I almost stayed! https://t.co/D765HZD0W6

Williams saw another report showing a quote from his dad’s interview, but he’s trying to set the record straight.

“Wanna take this down? The fans and my old teammates are the reason on y I almost stayed!”

Williams claims that the fans almost got him to stay and rejoin his teammates at Oklahoma. In the end, though, he believed that USC gave him the best shot at getting to the NFL.

An interesting comment that directly contradicts his dad’s quote. In all likelihood, the fans probably had very little to do with the decision at all.