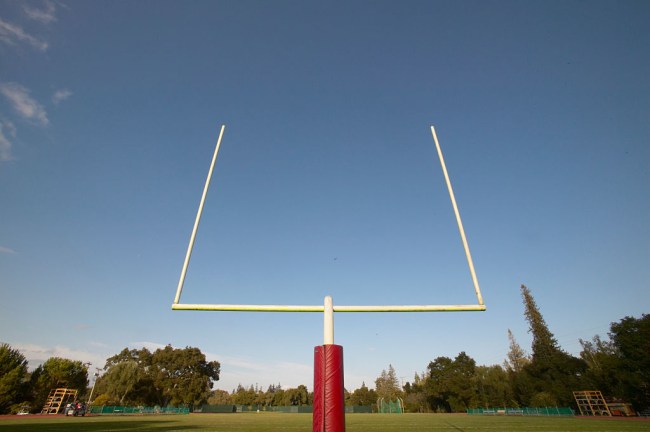 Full disclosure: This is one of the saddest football stories since the first two hours of The Blind Side.

It makes me cringe even typing this, but good thing I’m so #brave.

A California football team has decided to forfeit the rest of the season after two humiliating losses to start the season.

Healdsburg High School held a vote amongst players that ultimately led to the team disbanding. According to the Press Democrat, the vote came at the heels of two lopsided losses in which Healdsburg was clobbered 41-0 by Drake in the season opener and 61-0 by Justin-Siena last week.

At a closer glance, the writing was on the wall. At the start of the season, just 18 players were on the roster for the varsity squad, and after the two losses, five players called it quits and turned in their uniforms.

Healdsburg Principal, Bill Halliday, said the mood on campus Tuesday as one of “disappointment.”

In Healdsburg’s defense, a number of factors were working against them. The school has experienced declining enrollment over the last two years, with enrollment falling to 552 last year, over a 300 student drop from 2007. This resulted in the school not even being able to field a JV team two years back.

Principal Halliday also said that parents are increasingly uncomfortable allowing their sons to play football with the newfound knowledge of the detriments of CTE.

“A lot of parents don’t want their kids playing football,” he said. “It’s hard to watch, but I can’t question or second-guess a parent who has concerns.”

The school will not only take a hit on revenue from ticket and concession sales but it will also affect the fabric of high school life.

“We have some work to do. We have to figure out what to do with Homecoming. It’s not simple,” Halliday said. “That is our task right now — to not lose Friday night lights, but to tweak it a little bit.”

Imagine how sad a homecoming at a JV game would be.

Someone needs to make a 30 for 30 about the upcoming resurgence of Healdsburg High School. I FEEL IT IN MY VEINS!