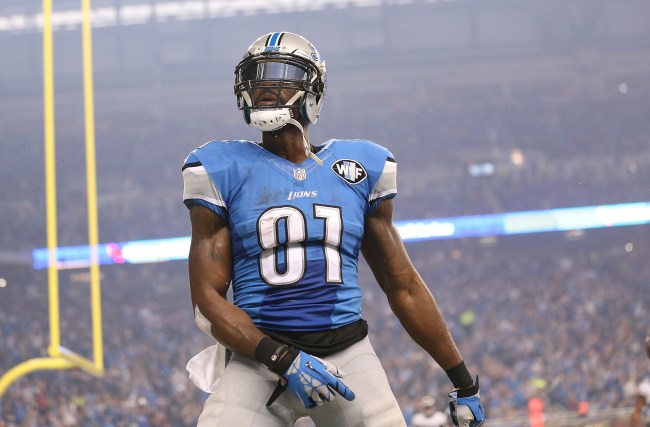 With so much more in the tank, the six-time Pro Bowler called it quits at age 30, a move that shocked and enraged the Lions organization. The Lions brass countered by making its star player return a seven-figure chunk of his signing bonus, a bonus attached to the eight-year, $132 million contract extension he signed in 2012, one of the largest sports contracts ever at the time.

Earlier this month, Lions president Rod Wood said that burying the hatchet with Johnson is “a very high priority.” Johnson responded in the press by urging Wood to put his money where his mouth is:

“The only way they’re going to get me back is they put that money back in my pocket. Nah, you don’t do that. I don’t care what they say. They can put it back, then they can have me back. That’s the bottom line.”

The 33-year-old expanded on his feelings toward the only NFL team he’s ever known in an appearance on SiriusXM NFL Radio this week.

Former Lions WR Calvin Johnson spoke to our @BobPapa_NFL and @charlieweissr about his relationship, or lack thereof with the Lions. pic.twitter.com/GQzwYk6Vi7

The signing bonus Johnson received in 2012 was $16 million, and while the exact number Johnson was forced to pay back has not been made public, it’s estimated that it hovered around $1 million.

As BroBible’s Nick Dimengo previously pointed out, this isn’t the first time the Lions organization has played the role of Indian giver to its star player. Barry Sanders was forced to give back $1.88 million of his signing bonus after his unexpected retirement at age 31. He was sued by the team for his initial refusal to comply with the demand.

It’s easy to see both sides on this one. Megatron did more for that franchise than arguably anyone outside of Barry Sanders. But, you get paid to play. Who do ya’ll side with?