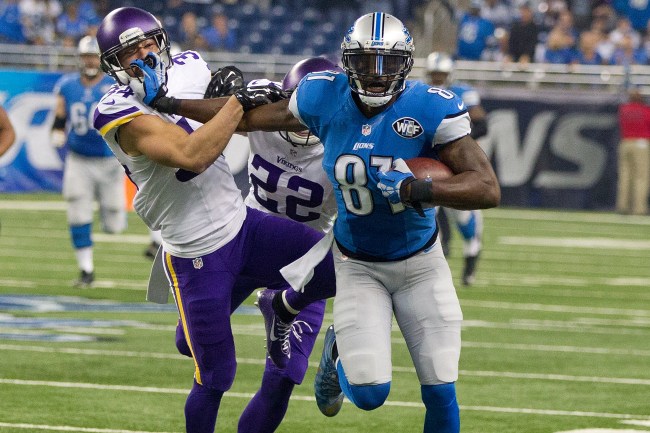 That was Calvin Johnson’s stat line when he decided to throw in the towel in 2016 after nine of the most productive seasons for a receiver in NFL history, and three years after signing an eight-year, $132 million contract extension with the Lions, one of the largest sports contracts ever. (Calvin and the Lions organization have been in a contentious, ever-lasting tug of war over who has ownership of a chunk of money associated with the contract.)

In a recent piece by Sports Illustrated, the 33-year-old claims to have suffered at least nine concussions in the NFL, a “super conservative estimation” in his opinion.

Megatron revealed that he smoked pot after every game “to heal,” but there was no shortage of harder stuff provided by the Lions organization.

“When I got to the league, [there] was opioid abuse,” Johnson says. “You really could go in the training room and get what you wanted. I can get Vicodin, I can get Oxy[contin]. It was too available. I used Percocet and stuff like that. And I did not like the way that made me feel. I had my preferred choice of medicine. Cannabis.”

Johnson also claims that in 2012, the Lions made him change his story about an obvious concussion he suffered in a 2012 game against the Vikings.

He got used to concussions. “Bam, hit the ground real hard. I’m seeing stars; I can’t see straight,” he says. “But I know in a couple minutes I’m gonna be fine. Because I’ve done that plenty of times before.” In 2012 he told reporters he suffered one against the Vikings. The Lions said (and maintain) that he passed their concussion protocol, and Johnson later apologized: “I misused the terms nerve damage and concussion.” But he says now, “I knew I was concussed because I blacked out. I wasn’t seeing straight. And they wanted me to change my story.” Mostly, he says, he played through concussions because in his NFL that’s how you earn Employee of the Month.

After the game, reporters asked Johnson whether he suffered a concussion to which he replied: “Yeah, yeah, he knocked me good,” Johnson said. “You could tell. It was obvious.”

The Lions organization had a different assessment, claiming their star receiver suffered a stinger and not a concussion. This prompted Johnson to release a statement saying he “misused” the term “concussion.”

Oh, and if you’re wondering about what the state of Megatron’s relationship with the only team he’s ever known is, well, “won’t step foot in anything Lions-related” unless he gets his money back.