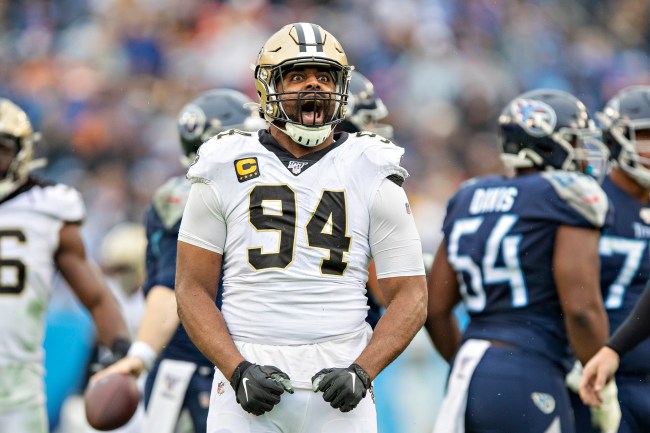 Cameron Jordan is quite the personality, guys, with the New Orleans Saints‘ five-time Pro Bowler known to speak his mind and put himself out there for the good of the people. Not only have we seen that over the years from interviews that the defensive end has done, but also when he served as a sideline reporter for XFL games earlier this year, showing his dynamic range of abilities.

Like most entertaining athletes, if you put a microphone in front of Cameron Jordan, the dude won’t be shy with what he’s going to say. So it shouldn’t come as too big of a surprise that the behemoth of a man let loose when talking about NFL quarterbacks he’d least like to be quarantined with right now, going in on all the guys he’s used to sacking in the backfield.  But the signal-caller who got the most heat form Jordan? Sam Darnold of the New York Jets.

As a recent guest on The Adam Lefkoe Show, Cam revealed which signal-callers he’d find most annoying to be stuck indoors with right now during the pandemic, and the reasons for why he chose them. Most of the explanations were pretty fair, but Jordan said it was Darnold’s “punchable face” that led him to snag the No. 1 spot on his list. Take a look below at the defender’s hilarious explanations.

Cam Jordan listed out the five worst QBs to be quarantined with:

➖ Eli Manning
Would bring the family

➖ Patrick Mahomes
Too many accolades

“I think it’s obvious, number five would be Mason Rudolph, just don’t know where we’re going to be politically speaking, don’t know how much of a conversation we could actually table,” Jordan said. “Number four, I would say Eli Manning. Simply because I know if Eli comes over, he’s probably bringing Peyton and Archie, and probably [Cooper] and I didn’t ask for all of that, it’s quarantine time … I would probably not want to have Pat Mahomes in the house. What is he, a third-year in, he’s technically a second full-year starter. Has the Super Bowl already, been an MVP already, just too many accolades … Cam Newton would probably be on that list again just because I don’t want to see the colorful magnificent sombreros that he has every day.

“He just has a face that I want to punch,” Jordan said. “I look at Sam Darnold and I’m just like, he came out of USC, I just feel like there’s so much private school in him. I never beat USC in college so there’s already a gripe there. He just has one of those faces, I’m not sure what it is. It’s almost Baker Mayfield-esque, but I like Baker Mayfield’s personality. I don’t know anything about Sam Darnold. I just look at him and am like, ‘I can’t wait to hit him blindside.’”

Damn, those are some fighting words from Cameron Jordan, aren’t they? Given the fact Jordan went to Cal and Darnold went to USC, it makes sense as to why the defensive end doesn’t have a great perception of the soon-to-be third-year signal-caller. And with the Saints and Jets set to play in the 2021 NFL season, we’ll have to wait a couple years to see if the defender or the quarterback prevails when they go head-to-head — so I’m sure this will serve as bulletin material for both guys leading up to that matchup down the line.

As for the quarterbacks Jordan said he’d like to be in quarantine with, his top three were Matt Ryan, Russell Wilson, Drew Brees, Teddy Bridgewater, and, in a weird twist, Cam Newton again, saying the weird clothes he wears could also be used for a fashion show. And this, right here, is why Cameron Jordan should never stop being himself. A+ stuff.