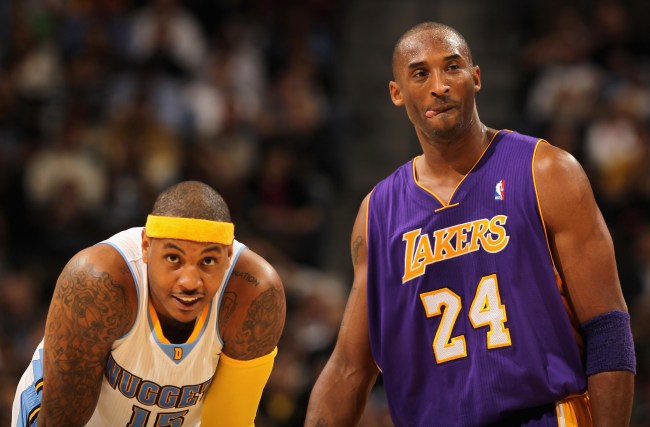 Monday would have been 43rd birthday of Kobe Bryant. So on Black Mamba’s birthday, we get insight on Kobe from one of his biggest adversaries-turned-friends – Carmelo Anthony. Melo recalled how he and Kobe became friends because of some “disrespectful sh*t.”

Anthony recently appeared on Matt Barnes and Stephen Jackson’s All The Smoke podcast, where he reminisced about squaring off against Kobe in the 2009 Western Conference Finals.

“That was my moment where me and Kob became – before that we went to the Olympics. We became very close,” Melo said. “But we became close on some disrespectful sh*t.”

“You know Kob, he going into your neck. He elbowing you,” Anthony said of Kobe’s defense. “I had my braids back then, too, so he touching my head. I’m like, ‘Don’t touch my head. Don’t touch me no more, dawg.’ He’s smirking. He’s throwing his little sh*t elbows.”

RELATED: The Advice Michael Jordan Gave A Young Kobe Bryant, Who First Took It As An Insult

The Westen Finals battle between Kobe’s Los Angeles Lakers and Melo’s Denver Nuggets was a war, especially in Game 1 when the two superstars fought to the end. Led by Kobe’s 40-point effort, the Lakers beat the Nuggets in Game 1, despite Melo scoring 39. The Lakers won the series in six games, and in every game the top scorer was either Kobe or Melo.

Before the classic playoff series as foes, Kobe and Melo were teammates for Team USA in the 2008 Beijing Olympics. Carmelo revealed how Kobe inspired him by showing respect.

“He pulled me to the side in the Olympics and said, ‘You’re a bad motherf***er,’” Anthony said on the podcast. “He knew what it was already, and it took him forever to get there. For me, as a young player, four years in the league at that time, you want nothing more than someone like that to come to you and be like, ‘No, you a bad motherf***er.’”

Carmelo played in an NBA game immediately after the death of Kobe Bryant, which he said was “probably was the hardest game I ever had to play.”

“Our friendship and relationship was deeper than basketball,” Carmelo said of Kobe at the time. “It was family. It was friendship. Basketball was the last piece of connective tissue between us two.”