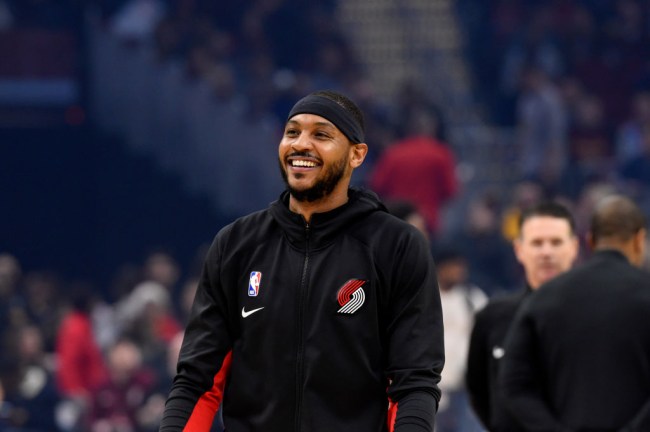 Like every other person that’s ever played in the NBA, Carmelo Anthony was recently asked the question that will never, ever go away: who is the GOAT, Michael Jordan or LeBron James.

While Melo ultimately tipped his cap to MJ, he explained that players like Kobe Bryant and James deserve plenty of respect too, which is why he isn’t a fan of the GOAT debate at all. He pointed out that the society we live in wants one solid answer instead of showing love to a whole range of players.

“Why can’t we say, ‘M.J. was very great, LeBron is very great, Kobe is very great.’ We’re not allowed to say those things today, because it’s always this or that, and that’s just our society — you have to choose one,” Anthony told CBS Sports Radio.

“I don’t like it,” he said. “And I say that because whenever we do that, we fail to appreciate what we have in front of us. Any time these comparisons are made, whether it’s anybody — old school versus new school — it’s like, why can’t we just appreciate everybody for what they bring to the game?”

Melo’s statement here is certainly a respectable and honest one. He certainly did a better job at explaining his perspective than Magic Johnson who recently said James is the ‘best of all time’ while MJ is ‘the greatest of all time,’ whatever that means.

While Anthony is by no means among the few names you could insert into the GOAT debate, he’s had a similar career to Jordan in the sense that they’ve both been misunderstood and portrayed negatively at points in their careers. That was one of Anthony’s biggest takeaways from ‘The Last Dance’ documentary.

“It hit home, but then you also understand that at the end of the day, there’s nothing you can do if somebody wants to put a negative narrative out there about you,” Anthony said. “There’s really nothing you can do, so what I’ve learned over the years is, whatever’s gonna happen is gonna happen. Whatever people are gonna say, people are gonna say. Just don’t give them anything to talk about. You’re doing your job and working hard. If you know you’re putting your all into it, anything somebody else says doesn’t even matter to you.”

Maybe you’re a Knicks fan and reading those comments sort of hit a tough spot after things didn’t really turn into much during Melo’s time in New York, but you can’t fault the guy for being honest.