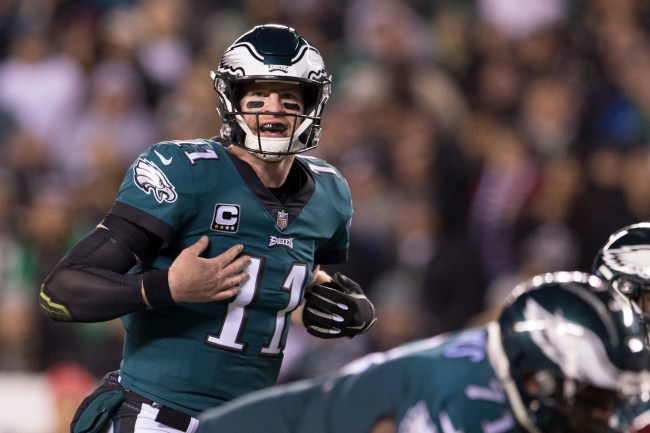 Carson Wentz and the Philadelphia Eagles got some bad news today, when a recent CT scan revealed that the 2016 No. 2 overall pick has a fractured vertebrae that wasn’t seen earlier; and the injury could cause Wentz to miss the remainder of the NFL season. So, just like last year, it’s Nick Foles’ turn to take the reins and try to lead Philly to the playoffs and, if you’re really optimistic, the Super Bowl again.

Wentz had been dealing with a back injury for several weeks and was expected to miss this week’s critical game against the Los Angeles Rams in a showdown with 2016 No. 1 overall pick, Jared Goff. In a contest between the teams last season, Carson Wentz tore his ACL, which led to the aforementioned Foles taking control of Philly’s offense and, fmaously, leading them to a Super Bowl victory. Eagles fans hope that the same result can happen.

According to CBS Sports, the fractured vertebrae in Carson Wentz’s back went unrecognized from scans earlier in the season. Here’s what ESPN’s Adam Schefter and NFL Network’s Ian Rapoport had to tweet about the injury, with both insiders reporting that Wentz’s latest injury may not necessarily keep him sidelined for the rest of this season.

A recent CT scan on Carson Wentz’s back revealed a fractured vertebrae that, if allowed time to rest, would fully heal without further expected issues, sources tell ESPN. There will be a continued evaluation to determine if continuing to play this year will make injury worse.

With no surgery coming for #Eagles QB Carson Wentz, rest is the key. That’s why he’s not expected to play on Sunday — with QB Nick Foles starting. No determination has been made on Injured Reserve… but they won’t put him at risk. Looking more likely we’ll next see him in '19.

This could be a major blow to the Philadelphia Eagles’ already slim playoff hopes, but there will some confidence given what Nick Foles did last year. But can the backup really catch lightning in a bottle twice in 12 months? It’s a tall task, but Eagles fans are clearly hoping he can.

If Carson Wentz’s season is, indeed, over, he can at least lean on previous examples of high-profile quarterbacks who had similar back injuries; most notably Tony Romo. After fracturing a vertebrae in his back, Romo returned to the field and played at a high level, and Wentz is much younger than Romo was a few years ago. Still, this is bad news for the franchise quarterback in only his third NFL season.