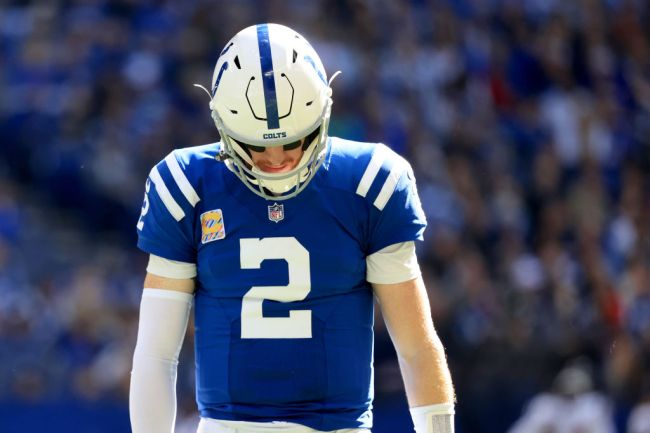 Carson Wentz has a legitimate chance to rival The Butt Fumble’s streak on SportsCenter’s Not Top 10. He committed an absolutely HILARIOUS turnover on Sunday Night Football and it had the internet in tears.

With a chance to take the lead at the start of the second quarter, the Colts had the ball on the 49ers’ 4-yard-line. Wentz took the snap and looked to his left but Nick Bosa was already around left tackle and closing in.

Trying to be the hero, the 28-year-old former Eagle stepped up in the pocket and tried to flip the ball to wide receiver Zach Pascal for six. Instead, he flipped the ball right into the chest of San Francisco linebacker Azeez Al-Shaair.

Lmao just look at it, it’s so funny:

In some ways, credit to Wentz. He is an absolutely gamer and has never backed down from a play that he thinks he can make.

And he thinks he can make every play.

The only problem is that Wentz can’t make every play. Take Sunday as Exhibit A.

The funniest part of this game so far was Collinsworth saying that Carson Wentz "knew better than that" after his like 3rd of 5 turnover-worthy plays (narrator: he did not) pic.twitter.com/lQLjhQNEZN

Wentz’s blunder at the goal line was perfectly Wentz and will reign as No. 1 on SportsCenter’s worst of the worst for quite some time. It is undoubtedly the funniest turnover since The Butt Fumble, which was retired as the longest reigning No. 1 was retired in 2013 after 10 months.

(Remember a time when you used to watch SportsCenter all day every day? I digress.)

The Butt Fumble does not get knocked from its top spot by Wentz, but goodness gracious it’s truly all-time bad.

Carson Wentz to the 49ers

Carson Wentz when he hasn’t thrown a pick in a while: pic.twitter.com/ca0fQLcdnw

Me trying to tweet something positive about Carson Wentz

Carson Wentz is playing like the mob is gonna murder his entire family if he doesn’t throw at least four picks in the first half.

Both were on shovel passes.

Eagles fans seeing Carson Wentz give the ball away pic.twitter.com/oTyhwhitma