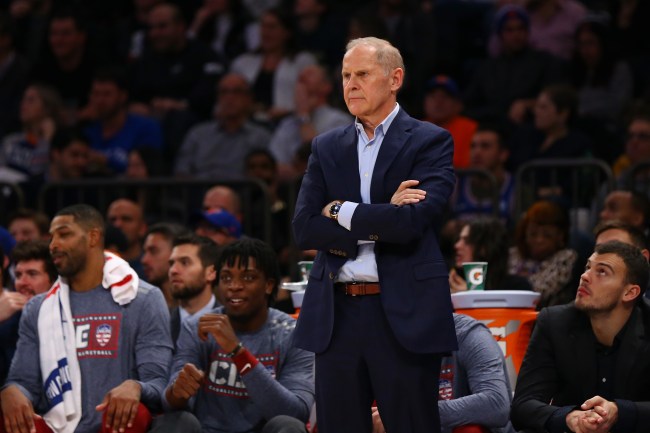 Back in January, former Cavs head coach John Beilein found himself in hot water when he called players on the team a bunch of “thugs” during a film session. Beilein would later clarify that he meant to say”slugs” but the damage was already done.

After stunning players in a film session with a verbal suggestion that they were no longer playing “like a bunch of thugs,” Cavaliers coach John Beilein reached out individually to players tonight to insist he meant to use the word “slugs.” Story on ESPN: https://t.co/kqhRJ0qGjs

“I didn’t realize that I had said the word ‘thugs,’ but my staff told me later I did and so I must have said it,” “I meant to say slugs, as in slow-moving. We weren’t playing hard before, and now we were playing harder. I meant it as a compliment. That’s what I was trying to say. I’ve already talked to eight of my players tonight, and they are telling me that they understand.”

On Tuesday, Beilein agreed to step down as head coach of the Cavaliers

Story filed to ESPN: After a brief and tumultuous tenure, John Beilein is leaving as Cleveland's coach. Associate HC JB Bickerstaff will be elevated to head coach. Beilein's expected to say goodbye to staff and players on Wednesday upon team's return from All-Star Break.

According to a report from The Athletic’s Shams Charania, Jason Lloyd and Joe Vardon, many players on the team felt that Beilein had insulted their intelligence with the slugs explanation and would troll him by playing “thug” related songs like “Thuggish Ruggish Bone”

A number of the players never really embraced his explanation. In fact, some of them thought it was an insult to their intelligence, one player told The Athletic.

“There was no coming back from that,” he said.

Instead, multiple players began playing songs that included the word “thug” whenever Beilein was within earshot, sources said: Bone Thugz-n-Harmony’s “Thuggish Ruggish Bone” and Tupac’s “Thugz Mansion” among them. As the team boarded the bus a few days after the incident, one player was intentionally playing Trick Daddy’s “I’m a Thug” with Beilein a few feet away. Other players blasted songs with the word “thug” loudly during workouts in the facility. Players did this to make light of a very tough situation, according to one team source.

Cavs players must have really hated Beilein to be this petty around him.