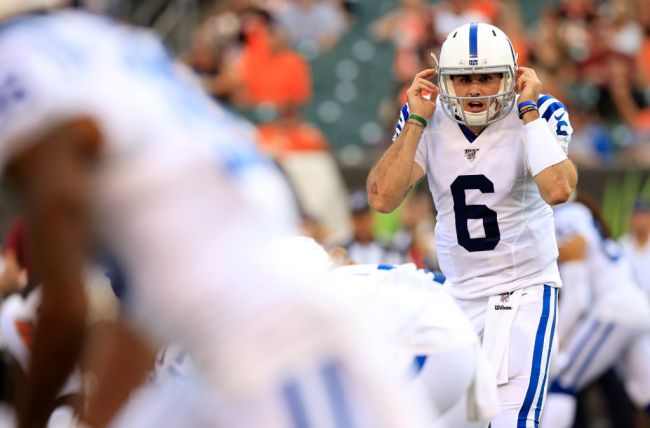 As NFL Draft season reaches its peak over the course of the next few weeks, it’s time to unlock the Swag. Among the prospects looking to showcase their talent with offseason workouts is a familiar face who has already been in the league— Chad Kelly.

The OM Spirit’s David Johnson reports that the former Ole Miss quarterback will be among the school’s Pro Day participants on Thursday. Kelly, at age 26, will throw in front of the NFL scouts in attendance with hopes of landing back on a professional roster. What he did in college was incredible, but he struggled with off-field issues after being drafted as 2017’s Mr. Irrelevant, a title given to the last pick in the draft.

Kelly was drafted by Denver after two years with the Rebels and played four years between the Broncos and the Colts, but he never threw a pass in a regular season game. That didn’t keep the nephew of Hall of Fame quarterback Jim Kelly from making a strong impression with his rocket arm and sneaky wheels.

Colts head coach Frank Reich was impressed with the SEC’s leading passer in 2015 and entered the preseason in 2020 with a favorable outlook.

“I cannot tell you how happy we are with Chad,” he said. “He’s progressed a lot as a quarterback. He really works hard at it. He knows how to fight. He’s a good teammate. He has worked with Phil Simms. He’s really worked hard at his craft and continuing to improve.”

Perhaps more notably, he was suspended by the NFL in May of 2019 for violating the league’s personal conduct policy after he got a little too turnt at Von Miller’s Halloween party. According to a police report from his arrest, he toddled into the house of someone he did not know and proceeded to sit on the couch, “mumbling incoherently” aside the homeowners. Kelly, who was dressed similarly to Woody from Toy Story, only left after one of the residents chased him out with an aluminum vacuum tube.

Swag has since cleaned himself up and wants to get back to balling. People forget that he was the best quarterback to play at Ole Miss, and if he can show out on Thursday, there are multiple NFL teams for which he would be a solid backup, if not an upgrade as the starter. He’s an absolute baller.

You guys ever see the ESPN Sport Science when Chad Kelly put up the highest score of any QB they've ever tested? 👀 pic.twitter.com/OayGTux3Hl

In 2015, his only full season in Oxford, Kelly led the Rebels to a 10-3 record with a road victory over eventual national champion Alabama and a decisive Sugar Bowl win over Oklahoma State. Kelly led the SEC with 4042 passing yards and 31 passing touchdowns that year, over Dak Prescott, Kyle Allen and Will Grier, among others. To compare, Eli Manning’s best single season saw 3,600 passing yards and 29 passing touchdowns. Kelly also recorded a higher completion percentage, rushed for 500 more yards and ran for seven more touchdowns than Manning.

Ole Miss’ Pro Day is set to begin at 12:45 p.m. CT on Thursday and will be broadcast on either SEC Network or NFL Network. Swag is not expected to participate in any of the standard Pro Day drills, but will be dropping dimes and throwing lasers to former Rebel receivers Damarkus Lodge and Damore’ea Stringfellow. The two were part of a ‘Nasty Wideouts’ receiving core that included A.J. Brown and D.K. Metcalf, and each had a cup of coffee in the NFL. Lodge had an equally as impressive career as his NWO counterparts, but never saw the active roster with Cincinnati or Tampa Bay. Stringfellow, you may remember from his 99-yard touchdown in preseason for the Dolphins.

All three athletes could earn another opportunity to play in the NFL, but Kelly could become a legitimate starting quarterback. He has the physical traits that teams are looking for, he can take off and break off a first down run in space, and he throws the deep ball better than most of the league.

Take Pittsburgh, for example. Mason Rudolph has received significant playing time for the Steelers over the past two seasons and Kelly dominated him in the Sugar Bowl. The talent gap between the two is fairly significant, but Swag just hasn’t been able to earn a legitimate look. His window is closing, but Thursday is a great start to getting back to where he (and everyone who likes football) wants (or should want) him to be. UNLOCK THE SWAG!