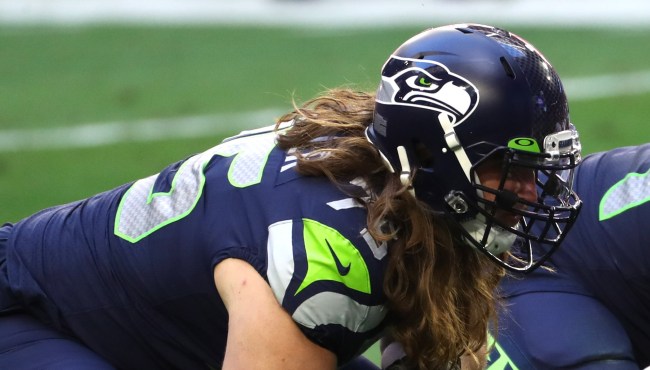 Chad Wheeler, a backup offensive tackle for the Seattle Seahawks in 2020, was arrested last month of charges of domestic violence against his then girlfriend Alleah Taylor.

A report by the Kent Police Department revealed a shocking scene, and accused Wheeler of choking his then-girlfriend until she lost consciousness because she refused to bow to him during an argument.

The Wednesday after his arrest, Wheeler wrote on Twitter, “Events happened over the weekend that transpired from a manic episode. I am deeply sorry for the pain and suffering that I have caused to Alleah and her family. I apologize profusely for the turmoil that I have caused to my family, teammates, fans and those closest to me. The most important thing right now is that Alleah gets the care she needs and I get help. Both are happening. It is time for me to walk away from football and get the help I need to never again pose a threat to another. I cannot express my sorrow or remorse enough. I am truly ashamed.”

Wheeler has since deleted the tweets.

Following his arrest, the Seattle Seahawks issued a statement condeming his actions and Wheeler was released on $400,000 bond.

Fast forward to Wednesday, Feb. 10, and during an appearance on CBS This Morning, Taylor shared even more grim details surrounding the alleged attack. (I have to say alleged, even though he admitted it on Twitter, because he hasn’t technically been found guilty of anything by a court of law. But I digress.)

“I still have to regularly get my concussion checked… I have bolts, and steel, and a steel plate I’m gonna have forever in my arm… I’m gonna have…gonna have to deal with this the rest of my life,” Taylor revealed.

How things got so out of hand is still somewhat of a mystery to Taylor as she said prior to the incident they had barely had an argument.

“We were, like, best friends. We did everything together…I even introduced him to my family. We would babysit my nephew together,” she said

On the day in question, Wheeler, who Taylor knew suffers from bipolar disorder, shaved his head in what she described as the beginning of a “manic episode.”

Taylor then says Wheeler grabbed her by the neck, threw her on the bed, and tried to choke her. She says she blacked out twice during the alledged attack.

“I had touched my face. And I looked down, and there was, there’s blood on my hand… I remember getting up and running to the bathroom. Chad was standing by the bed, by the doorway. And he was sipping his smoothie and was, like, “Wow, you’re, you’re still alive,” said Taylor.

Wheeler pleaded not guilty to three charges, including domestic violence assault on February 1. His trial is scheduled to take place sometime in April.