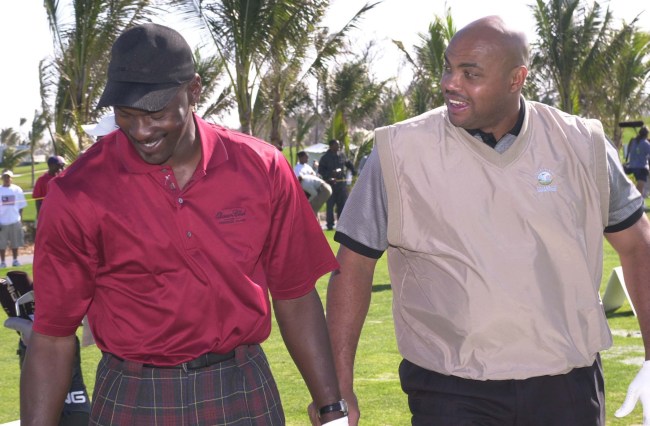 For decades, Charles Barkley and Michael Jordan seemed to have a great friendship. Sure, the two Hall of Famers were competitors on the basketball court, but, off the floor, the two had a relationship that led to time playing golf and cards together, among other activities. Barkley even mentioned how the two would play Black Jack every night during the ’92 Olympics while both were members of the famed Dream Team, proving how close MJ and Sir Charles really were.

Unfortunately, things changed as the years went on, as Barkley criticized Jordan’s method to running the Charlotte Bobcats/Hornets franchise, in which he’s the majority owner. Given MJ’s competitive spirit, the six-time champ didn’t take the criticism from a so-called friend too kindly, and, reportedly, cut Charles Barkley out of his life after the harsh words about the organization. As a refresher, here’s what Barkley said back in 2012 about the way His Airness was running the Bobcats/Hornets, per ESPN.

“I think the biggest problem has been I don’t know if he has hired enough people around him who he will listen to,” Barkley said Thursday on “The Waddle & Silvy Show” on ESPN 1000. “One thing about being famous is the people around you, you pay all their bills so they very rarely disagree with you because they want you to pick up the check. They want to fly around on your private jet so they never disagree with you. I don’t think Michael has hired enough people around him who will disagree.”

Fast-forward to eight years later, and Barkley — who’s, arguably, the most popular (and honest) hoops analyst on the planet — says his assessment back then are still impacting his relationship with Jordan. In fact, the 1993 NBA MVP claims he and MJ haven’t even talked since the comments were first published; something Barkley says still hurts.

While joining “The Waddle & Silvy Show” on ESPN 1000 Tuesday, the same program he made the initial comments about in 2012, Charles Barkley said he doesn’t see any hope for he and Michael Jordan to rekindle their friendship, and claims MJ has his number, but that he doesn’t expect a call anytime soon.

Basketball Hall of Famer Charles Barkley admits he’s still “really, really sad” about the fact that his longtime friendship with Michael Jordan deteriorated years ago because of critical comments Barkley made about the way Jordan ran the then Charlotte Bobcats franchise.

But Barkley doesn’t sound optimistic about a reconciliation.

“The guy was like a brother to me for, shoot, 20-something years,” Barkley said on Tuesday’s Waddle and Silvy Show on ESPN 1000 in Chicago. “At least 20-something years. And I do, I feel sadness. But to me he’s still the greatest basketball player ever. I wish him nothing but the best. But, there’s nothing I can do about it, brother.”

What if Jordan were to call and tell Barkley that he was wrong and he understood that the commentator was just doing his job?

We all knew how private Michael Jordan already was, but even those in his inner circle, as Charles Barkley was at one point, can be cut out as fast as they were let in. That’s something that seemed to hurt Barkley, who said he thought his friendship with MJ was above that, and that, as a basketball analyst, Jordan would understand the criticism (and honesty) from a longtime buddy. Unfortunately, that didn’t seem to be the case.

“The thing that bothered me the most about that whole thing, I don’t think that I said anything that bad,” Barkley said. “I’m pretty sure I said, ‘As much as I love Michael, until he stops hiring them kiss-asses, and his best friends, he’s never going to be successful as a general manager.’ And I remember pretty much verbatim I said that. And the thing that really pissed me off about it later is Phil Jackson said the exact same thing.”

“Listen, if you’re famous, and Michael at one point was the most famous person in the world, everybody around you is either on the payroll or letting you buy drinks and dinner and flying around on your private jet. Very few of your friends are going to be honest with you. And that’s very hard for any celebrity, but especially somebody of his stature.

“But I thought that was one of the reasons we were great friends. Like, ‘I can ask Charles anything and I know he’s going to give me a straight answer.’ But part of my job [as an analyst] is, because I can’t go on TV and say ‘Another general manager sucks’ and then just because Michael’s like a brother to me say ‘He’s doing a fantastic job.’ That would be disingenuous.”

Who knows what might happen down the line between Barkley and Jordan, but, given the fact it’s been nearly a decade since Sir Charles made the comments about his onetime friend, it sure doesn’t sound as if MJ’s any closer to reaching out, making up, moving on, and starting a friendship again. Hey, for better or worse, this is what made Jordan the GOAT — his ruthlessness towards anyone who gave him a reason to succeed.