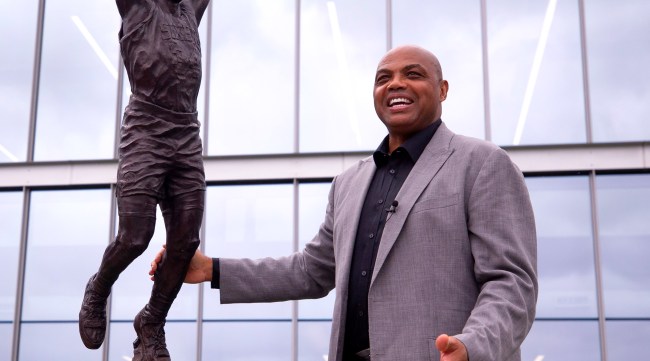 NBA Hall of Famer and current TV analyst Charles Barkley has never been one to be afraid to express his opinion, even if it isn’t going to be a popular one.

So when he was asked about the league in which he became a star allowing its players to put social justice messages on the backs of their jerseys in place of their names, naturally, Chuck had an opinion and was willing to share it.

While several players are taking advantage of this opportunity with “Equality” reportedly being the top choice, followed by “Black Lives Matter,” not everyone is doing it as 75 of the expected 350 eligible NBA players, including LeBron James and Anthony Davis, have chosen not to participate, reports ESPN.

Which is just fine with Sir Charles based on the discussion he had on Friday with CNBC’s Power Lunch.

“I think what’s happening now is we’re turning into a circus,” Barkley said during his appearance. “Instead of talking about racial equality, and racial justice and economic justice, we spend all our time worrying about who’s kneeling and who’s not kneeling, what things are being said on buses, what’s being said on jerseys.

“I think we’re missing the point. We need police reform, we need prison reform. Those are number one and two things to focus on. We need the cops, we need the good cops out there policing bad cops.”

“Like I said, we police reform and need prison reform, but the media, we all got a job to do. They’re going to spend all their time on what’s on somebody’s jersey and what’s on the buses and who’s kneeling and who’s not kneeling. And that’s going to defeat the purpose. My concern is this is turning this thing into a circus instead of trying to do some good stuff.”

Related: Jay Williams Rips NBA Players For Being So ‘Tone-Deaf’ With Their Whining About The Bubble

Barkley also added that NBA fans may, in fact, be turned off by the constant barrage of social justice issues being at the forefront of what is in theory, supposed to be entertainment.

“The last thing they want to do is turn on the television and hear arguments all the time. It’s going to be very interesting to see how the public reacts,” said Barkley.

He also addressed the NBA bubble situation in Orlando and whether he thinks it will work, something he didn’t sound very positive about while talking to ESPN on the same day.

“I think you have to be realistic,” Barkley told CNBC. “The chances that we can go three months without having an outbreak in the hottest spot in the country right now, I think you’d have to be foolish to think we could go that whole three months without getting positive tests, and then they’re going to have to make the decision whether to cancel the season or put the season on hiatus, but, listen, we are all flying in the dark right now and I don’t think anybody knows what’s going to happen.”

He’s definitely got that part right.