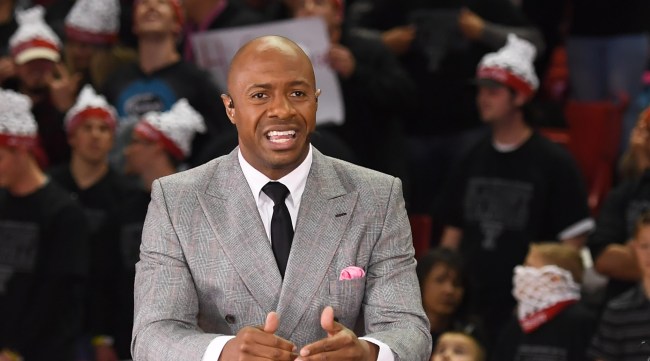 The NBA finally getting back to work down in Orlando inside a “bubble” designed to protect the players and staffs of the 22 teams that will be participating in finishing the 2019-2020 season.

As such, many NBA stars are feeling a little bit of culture shock as they will be confined to housing, meals and more that are a major change from what they have become accustomed to as millionaires.

Several of them have taken to social media to voice their displeasure with the situation – LeBron James even compared it to going to prison, which did not go over well – while others have complained about the quality of the meals being served and/or their accomdations.

Lakers guard JR Smith goes live on Instagram after landing in Orlando. He declares: “This shit is ass” just minutes after arriving in the #NBABubble pic.twitter.com/luUVO5fRlF

On Sunday, former NBA player and current ESPN broadcaster Jay Williams had apparently had enough of the whining and scolded the players for being “tone deaf” while living inside a “billion-dollar bubble.”

“We all have the right to complain but doing it publicly is different issue,” Williams wrote on Twitter. “I don’t need some of my #NBA brothers complaining publicly about quality of living & food accomodations in a billion dollar bubble during a pandemic.”

In an accompanying video, Williams went on to explain what he means.

We all have the right to complain but doing it publicly is different issue. I don’t need some of my #NBA brothers complaining publicly about quality of living & food accomodations in a billion dollar bubble during a pandemic. Tell me your thoughts. pic.twitter.com/cm9JARkmO0

“NBA players cannot be tone-deaf. My NBA brothers, you cannot be tone-deaf right now in this current environment. We all know the life that NBA players live. You are blessed. You get a chance to be on private planes, you get a chance to have millions of dollars in your bank account, you live a different level of life. But that is drastically different than what real, everyday, working Americans are going through right now.

“Now, you’re in a billion-dollar bubble. If you want to complain about the anxieties you have from COVID-related issues, I get it. Complain about that. We all have the right to complain about that. But when I hear NBA guys complaining about living facilities, food that they have being delivered to them, it is tone-deaf. It is tone-deaf. We need to think about people who are everyday, working people who are making minimum wage, trying to make ends meet, that are going to factories, that are going to really harsh working environments, where, if anything, maybe their employers are doing less to ensure their safety because they’re trying to increase the bottom line. They’re trying to earn and make money back from all the money that they lost during the times that a lot of these states, individually governed, have been dealing with this issue.

“So when I see guys that are going into a billion-dollar bubble — a billion-dollar bubble — and are getting food delivered to them, that have beds to sleep in, you can’t complain about that. Not while you’re making millions of dollars, not while your employer is going through drastic measures to protect you while they’re still paying you when that’s not the case for everyday, real working Americans. That bothers me.”

Of course, not every NBA player has been complaining.

For example, the Mavs’ Dorian Finney-Smith said, “A lot of teams are complaining, but where I’m from, I think it’s good food and good living.”

While Ja Morant told the Memphis Commercial Appeal, “My room is fine, my food is fine. I’m not a silver spoon guy so I know how to live in the conditions.”