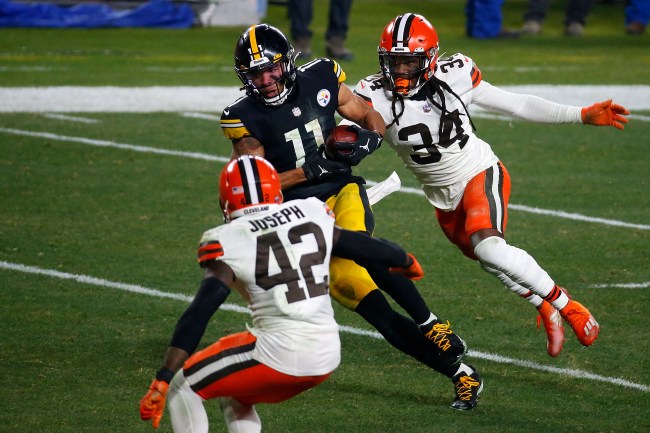 Look, real recognizes real, so I fully admit that Steelers rookie wideout Chase Claypool is an absolute beast who’s going to be a force to be reckoned with for years to come. Thing is, the Notre Dame product is a beast on the football field, but off of it, he still needs a little bit of work showing his maturity.

NFL fans witnessed that Monday afternoon while Claypool was streaming an Instagram Live to engage with fans and talking about Pittsburgh’s loss in the NFL Playoffs to the Cleveland Browns on Sunday night. At one point, the Browns led 28-0 in the first quarter, and, while things got a little anxious at certain points in the game, for all intents and purposes, a Cleveland victory was never really in doubt.

At one point, some of Claypool’s followers brought up the loss to Cleveland, which, naturally, triggered the rookie receiver into saying something that made him look like a sore loser and a real troll. Take a look below.

Chase Claypool: "Bad loss, but the Browns are gonna get clapped next week. So all good." 🤦‍♂️

Now, the Browns huge victory was obviously a shock to everybody, including Chase Claypool. After all, according to Claypool’s teammate JuJu Smith-Schuster, these were the same old Browns, with the Steelers running their mouths prior to the game as if they were playing a high school JV team. Boy did that ever backfire.

And while I’m all for trash talk and some good bulletin board material before and during a game, Claypool needs to man up here and stop acting like an entitled piece of crap. Browns beat your squad fair and square, dude, so you only look like a bigger loser talking about it the day afterwards.

There’s no doubt Chase Claypool did his best to keep the Steelers in the NFL Playoffs — as he caught five balls for 59 yards and two touchdowns against the Browns. But it wasn’t enough, and hearing him still try and beat Cleveland after his Steelers got thumped on national TV only shows how much more the 22-year-old needs to mature this offseason. Hope he enjoys it now that he’ll be watching the rest of the postseason from his couch.