Chris Long Got Pushed By A Rams Fan On Sunday, Triggering An Expletive-Filled Shouting Match 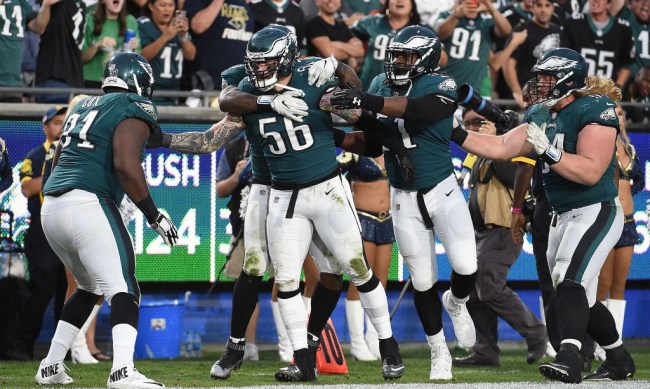 The Seahawks’ Quinton Jefferson wasn’t the only NFL player to almost go full Ron Artest on an unruly fan on Sunday. Another scene, somewhat similar in nature, also went down at the end of the Rams-Eagles game and involved Eagles’ defensive linemen Chris Long – AKA the “good guy” who’s donating all 16 of his game checks to charity this season.

On the final play of the game, the Rams were doing the usual running around trying to lateral their way to a score, when one of the Eagles’ defenders snagged the ball and ran it in for a touchdown.

To celebrate the TD and their big win a bunch of the Eagles’ players jumped up into the stands near some of their fans, a la The Lambeau Leap. When Chris Long tried to join in with his boys a Rams fan (yes, they apparently do exist) didn’t let him and shoved Long back down to the turf.

Naturally, because players and fans at NFL games are nothing if not rational and level-headed, this led to an expletive-filled shouting match.

They say our Philly fans are rough 🤔

Chris Long gets into with him
🎥 @NBCPhiladelphia Brad Berner pic.twitter.com/OKCLtCFQn0

After the game, and the altercation, reporter Liz Habib tweeted Long to get his side of the story…

Fan pushed me. Get some context and have a blessed night.

“Fan pushed me. Get some context and have a blessed night,” he tweeted back.

Well- that’s why I’m asking. Can we discuss? It’s out there-your side is important.

Here’s context for you @JOEL9ONE – you’re not the only NFL player to have an altercation with fans today. The questions need to be asked when you have an outburst with fans and yell “f-you, f-you, suck it” https://t.co/x1brpwCFvI

Liz, this was a highly emotional game. It's hard to ask a player to come down 1 minute after the game. Of course he was wrong but this was unlike him and for you to point it out is kind of petty. It got very hostile toward Long and he reacted. Move on.

Because you tried to jump into their arms, dude. I love you Chris, but that doesn't call for the language exchanged. Sometimes you have to be the bigger person.

I agree Lizzy. Chris need to check himself. He's a paid professional

Chris let's be clear about this. You leaped towards him , onto him …you invaded his space. He has every right to push you off him.

Here’s a thought, and I am just spit-balling here, but how about NFL players just stop jumping into the GD stands? Again, just a thought.