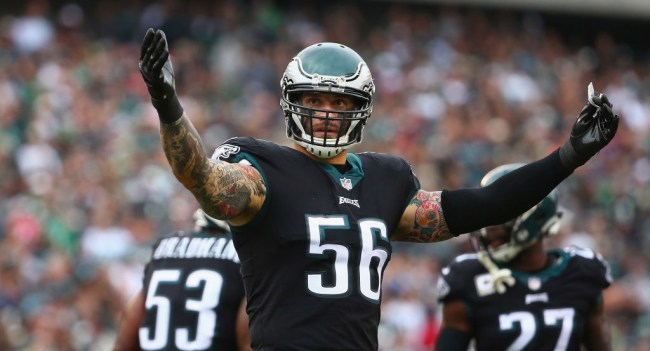 Back in 2016, when one of our very own, Matt Keohan, had to get Kylie Jenner’s hip tattoo after losing a bet did we realize that it would eventually become a thing with famous people.

Just a couple days ago, we reported that Tom Hardy finally succumbed and got a personalized Leonardo DiCaprio tattoo after losing a bet with the actor while they were filming The Revenant.

And now Eagles star defensive end Chris Long, who donated all 16 of his game checks to charity this year, will have to get an actual tattoo of his coach Ken Flajole’s face if the Eagles win Super Bowl LII thanks to a bet they made prior to the season. (Flajole was Long’s defensive coordinator during his years with the Rams from 2008 to 2015.)

“When Chris came [to Philadelphia], we were just talking, and I think it was probably training camp, and I probably told him something to the extent of, ‘Hey, nothing would be better than to raise the Lombardi Trophy with you,'” Flajole explained to ESPN. “And he said, ‘Hey, if we go to the Super Bowl and win, I’ll put a tattoo of your face on my body. I said, ‘OK, Chris, you better be careful now, because you never know how these things turn sometimes.'”

Long says that while he was joking, he realizes that if the Eagles do win he’s going to have to pay the piper. Not that this will be the first time Long has done anything funny and/or unusual in his NFL career. 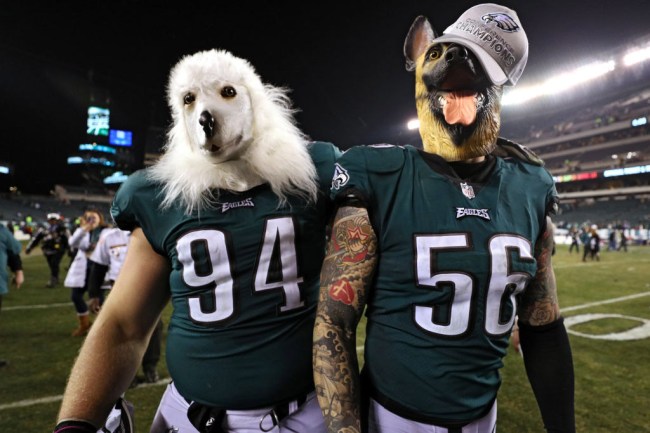 “A lot of people were like, ‘Were you betting that you’re not going to win?’ It wasn’t really a bet,” said Long. “I was joking, and he held me to it, and he reminded me this week. It will be a good problem to have. Man, I’m just going to hide his ugly mug. I don’t know where it’s going to be. But we’ve got to worry about winning the game first.”

Should that happen, Flajole isn’t going to cut Long any slack.

“I’m going to hold him to it,” said Flajole. “Now, if he wants to barter a little bit to get out of it… but I think he’s prepared to do it. I’m sure he’s going to put it in an inconspicuous spot where nobody’s gonna say, ‘Who is that guy?’

“I said, ‘Chris, remember one thing: You’re going to be my age one day, and your kids are going to say, “Dad, who is that guy on your arm?” or wherever you put it.’ But he’s a man of his word, so we’ll have fun with it.”

Here’s linebackers coach Ken Flajole talking about his bet with Chris Long. If the #Eagles win the Super Bowl, Long is getting a Flajole tattoo. pic.twitter.com/QMVJpKfYEN

And just like, as if we needed it, we have yet another reason to hope the Eagles beat the Patriots in Super Bowl LII.