Chris Paul And His Agent Vehemently Deny Rift With James Harden, So Someone In This Drama Is Lying 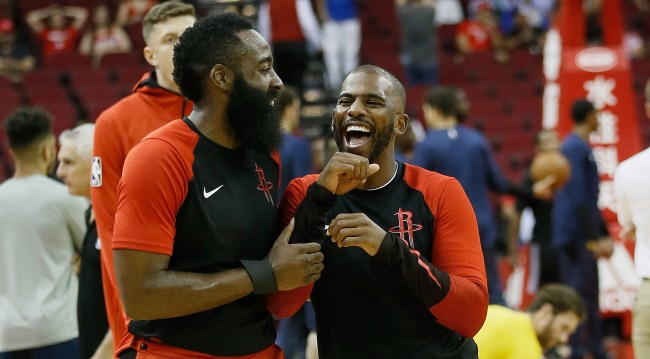 Rumors of a rift between Houston Rockets stars Chris Paul and James Harden have been swirling ever since Houston was bounced from the playoffs back in May.

The two reportedly had a “tense exchange” following their Game 6 loss to the Warriors – the fourth time in five years Golden State has eliminated the Rockets.

Shortly after that report, NBA insiders started saying that Paul’s time in Houston might be coming to an end.

After a couple of quiet weeks, the rumor mill was fired back up this week with a report that Chris Paul “has reached a point, team sources say, where [he] cherishes the chance to play without Harden on the floor.”

On Tuesday, it was reported that the relationship between Harden and Paul has become “unsalvageable” and the two stars would prefer to not play together, with Paul asking for a trade out of Houston.

Shortly following that report, Chris Paul and his agent Daryl Morey came out strongly denying that there’s any bad blood with James Harden or Paul wanting to be traded.

Morey getting involved as well. pic.twitter.com/Fci4FRypjc

“A thoroughly exasperated Daryl Morey said Chris Paul and his reps have never asked to trade him and he will be on Rockets next season. Said he and Harden do not have issues with one another and that he has spoken to both often this off-season about free agency evaluations, plans,” reported Jonathan Feigen of the Houston Chronicle.

Zach Lowe of ESPN reported pretty much the same, tweeting, “Just spoke to Daryl Morey. He reiterated there has been no trade demand from Chris Paul. ‘Tweet that I said that. Print it. Tweet it twice.'”

Naturally, there are those that say Paul and his agent had no choice but to issue denials if they have any hope of the 34-year-old with $124 million and three years left on his contract landing with another team next season.

One of those people, John Ledesma of The Athletic, said the reason for Paul and Morey’s denials is because, “Even some teams that they’ve called as just a dump, like ‘We’ll give you Chris Paul for free,’ those teams are like ‘we’re good.’ The value is not there.”

"Even some teams that they've called as just a dump, like 'We'll give you Chris Paul for free,' those teams are like 'we're good.'The value is not there"

And this is the reason Paul is denying the Harden rift. He knows he doesn't have a choice. pic.twitter.com/v7N60WpxWu

So, what is the real truth in this drama? Personally, I believe there is a rift between the stars as anyone with a television set could clearly see it coming several months ago.