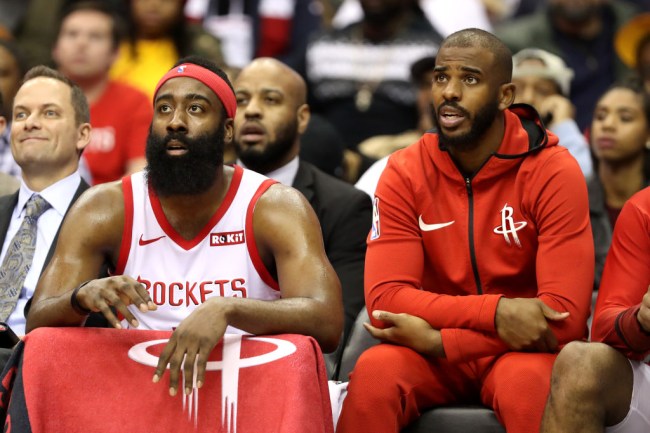 The Rockets have one of the most impressive—if not the most impressive—backcourts in the NBA thanks to James Harden and Chris Paul and you’d be hard-pressed to find a duo of guards capable of striking fear into the heart of their opponents like those two do.

Unfortunately, the Rockets were unable to overcome the Warriors in this year’s Western Conference Semifinals, and shortly after they were eliminated, rumors started to swirl that all is not well in Houston.

After being eliminated from the playoffs, Harden and Paul reportedly got into it with each other over the former’s ball-hogging tendencies, as the latter was apparently frustrated with the lack of ball movement that would contribute to the downfall of the team.

Shortly after, Adrian Wojnarowski reported the Rockets were putting virtually everyone on the trade block—including Paul.

Sources: In calls to front offices, Houston GM Daryl Morey is showing an aggressive desire to improve roster with all players and picks available in talks. Hard to imagine James Harden scenario, but the rest under contract – perhaps even Chris Paul – could be moved in right deal.

Last week, another report emerged that Paul and Harden were continuing to clash for a number of reasons to a point where Paul allegedly demanded Houston send him elsewhere (although it appeared there weren’t any takers).

However, Paul’s agent came out and denied he had any issues with Harden and now it appears the rumors can be put to rest if recent comments from the point guard are any indication.

The Houston Chronicle recently chatted with Paul, who said he’s perfectly content with his current situation:

“I never asked for a trade. I never demanded a trade…

With that said, it appears Houston is still open to cleaning house, so even if he hasn’t requested a trade, there’s no guarantee he’ll be rocking a Rockets jersey next season.