Here Are The Gifts NFL QBs Gave Their Linemen For Christmas, And WTF Was Joe Flacco Smokin’? 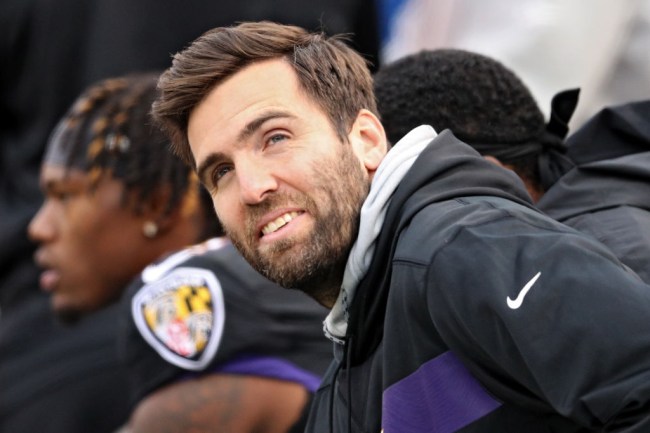 They say one’s true character is revealed in the gifts he gives. A gift card says you like the person, but not enough to put a shred of thought into a gift. A customized gift says that you didn’t wait until the last minute and just snipe something from a mall kiosk. NFL players are no different. You can really see tell a lot about a player by the gifts he gives to the colleagues who have helped afford him his lifestyle.

Here are the gifts that various NFL players from around the league gifted to members of their locker room. They will warm your heart.

The Bucs wide receiver bought 53 Bird Scooters with each player’s name and number inscribed on them as a Christmas gift. Valued at around $500 each, Evans likely dropped close to $27,000 on gifts for his teammates, who were so ecstatic to receive the gift they went berserk in the locker room. Mind you, Evans is currently playing out a 5-year, $82.5 million contract, so these scooters were basically stocking stuffers to him.

You can cook a whole turkey or a dozen burgers on one of these puppies at one time. Each of them costs $859, sans accessories.

This is cool. #Rams RB Todd Gurley and QB Jared Goff combined on a holiday gift for their O-linemen. Polaris Rangers for everyone! Gotta take care of the big men. (H/T @TG3II’s IG) pic.twitter.com/UQGiqmzCBG

These look like the Ranger Crew models, which seat 4-6 people and can cost upwards of $25,000.

It’s also been reported that Goff and Gurley were given a Christmas gift by their offensive line.

Jared Goff said Rams OL John Sullivan "asked early on" for a new off-road ride for Christmas. "I was like that is going to be quite expensive," Goff said. Goff and Todd Gurley teamed up for a set of Polaris Rangers for the guys. "It ended up being a good deal."

Carson Wentz gifted his offensive linemen each a Yeti Cooler filled with a bunch of stuff.

Carson Wentz taking care of his O-Line with some Yeti gear … pic.twitter.com/u8hjgP4TUU

Thanks for the Christmas gift @cj_wentz !!!! pic.twitter.com/3Di8wBZ0cq

On Thursday morning, every one of the Ravens’ offensive linemen arrived to find restaurant-grade slushy machines in front of their locker, courtesy of Flacco.

The machines cost about $2,000 each and Flacco even tossed in some pricey accessories. [via Ravens]

Flacco has been known to give creative gifts. Back in 2016, the Ravens quarterback gave his entire offensive line a virtual reality Oculus Rift headset and the Alienware gaming processor to boot.

Josh Allen got all of the offensive linemen new IPads.
For Wyatt Teller, it was another "Welcome to the NFL" moment. He said in college, the OL all got flasks as a gift. Now, it's a top of the line IPad.
Teller also noticed Josh signed it "From the QB room".
Always a team player. pic.twitter.com/LF2Z35jsFd

“He’s giving each of us custom jeans,” one Giants offensive lineman told NJ Advance Media on Monday. “It was pretty cool, he brought in a tailor, measured us all up and everything. I’ve never had that many measurements or anything like that. I’ve never even owned a pair of custom jeans, so it’s cool.”

“I’m not really good with gifts,” Barkley admitted to NJ Advance Media. “I gave them an option. I gave those guys a limit, I’m not going to tell you what the limit is, but I told them ‘just let me know what you guys want, and I’ll get it,’ and I told some of them that if they wanted me to donate towards a foundation or a charity of their choice, I’d do that, too.”

I choose to believe the limit was $50. A gift card to Applebee’s would be fine in my book.