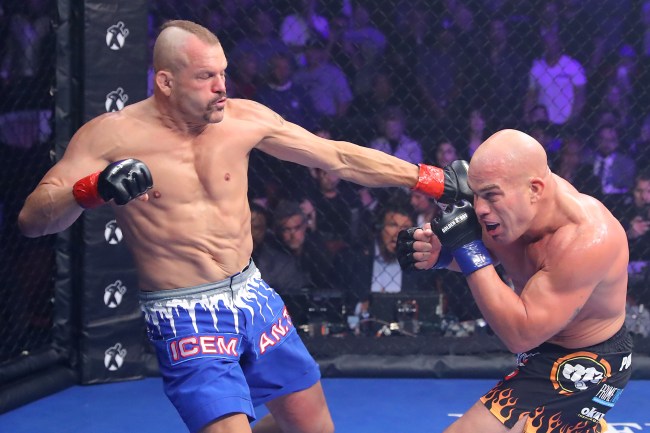 Before Conor or Ronda or Khabib or Jones, there was Chuck Liddell.

The 50-year-old Hall of Famer was on Ground Zero of what Forbes estimates to be a $7 billion business today, helping popularize a sport that once closer resembled a scene from Fight Club than Vegas events doting Instagram models and Tom Brady and Shaq in attendance.

On our Endless Hustle podcast, we spoke with the former UFC Light Heavyweight Champion about the evolution of the sport he helped cultivate as well as his bitter rivalry with Tito Ortiz, who was knocked out for the first time ever by Liddell at UFC 47 in 2004.

The two would go on to face each other two more times, with Liddell winning the second contest by technical knockout in the third round despite TEARING HIS MCL prior to the fight and popping the tendon out on the middle finger on his left hand during the fight itself.

In their final meeting in 2018, well beyond their primes, Ortiz would get his long-awaited revenge by knocking out Liddell in the first round.

Despite the fighters’ intense rivalry captivating the public, putting the sport on the map, and making each other millions, the two will not be meeting up for a couple cold ones in this lifetime.

UFC legends and bitter rivals @ChuckLiddell and @titoortiz will not be meeting up for a beer in this lifetime.

“People always talk to me like I hate him or something. I don’t hate the guy.

I don’t care enough about him to hate him actually.

But I hope he has a great life. I don’t particularly like the guy, that hasn’t changed. I don’t deal with him.

He’s running for office down in Huntington Beach. He’s still down there.

…Personally, I don’t really want to be friends or anything. In general I hope he does great.”

I’m sure Chuck will not lose any sleep if Tito does not do great. Sounds like it took everything in his power to say ‘I hope he does great.’

Here is Chuck talking about the ascendence of Conor McGregor and how it relates to the growth of MMA fighting.

With his recent legal troubles, @ChuckLiddell offers @TheNotoriousMMA #ConorMcGregor some legal advice & more in the new episode of Endless Hustle, out now!

***Check out our entire interview with former NY Giant Rashad Jennings and UFC Godfather Chuck Liddell on this week’s episode of Endless Hustle.***

>Chuck Liddell Interview (9:21 -1:08:42)
-Where his long-standing beef with Tito Ortiz stands today
-The most painful injury he’s suffered in his career
-His take on where Conor McGregor has taken the sport he helped popularize.