Despite Dying Six Years Ago, The Cleveland Guardians Tweeted Out A Harambe Meme, Proving Our King Is Eternal 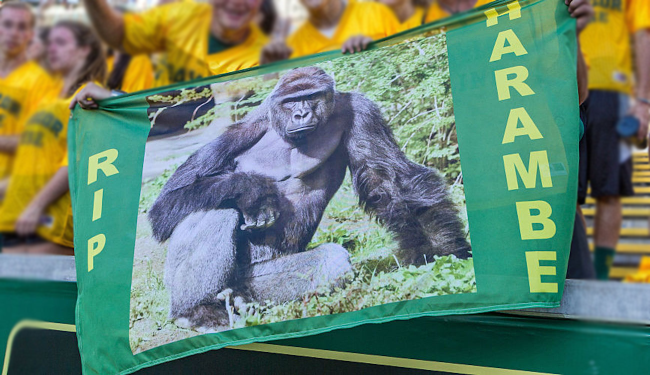 While I might work on the internet, I actually loathe it quite a bit. I believe a lot of our issues can be traced back to the invention of the internet and therefore social media. These apps are melting our brains. Sure, I might’ve met my girlfriend on Hinge (no free ads, though, Venmo me expeditiously, Hinge), but sometimes I wonder what the long-term effects of having a generation form their opinions on relationships through the prism of rapid-swipe-focused dating apps will be. And this isn’t even the tip of the iceberg when it comes to the internet, really. Just think about all the harm various forums and communication apps have done over the years.

All that said, though, my bewilderment and frustration with the overall apparatus of the world wide web aside, there are some corners of the internet that still do provide me with joy. Those Instagram accounts that make miniature versions of food. That Twitter account Dudes Posting Ws. Spongebob and Stephen A. Smith memes. And, of course, Harambe.

For some inexplicable reason, close to six years after his death, Harambe still maintains an unbelievable amount of cultural relevance. I’d challenge you to find anyone under the age of, I don’t know, 35 or 40-years-old who doesn’t know who Harambe is.

Over half a decade later and the memes are STILL going strong, whether it be from nameless burners to official MLB accounts such as the Cleveland Guardians, who hilariously paid homage to their “guardian angel” following a game against the Los Angeles Angels. It just goes to show that our king is truly eternal.

But truly, Guardians vs. Angels has us thinking about our guardian angel tonight. ❤️ pic.twitter.com/XBlIh47Diy