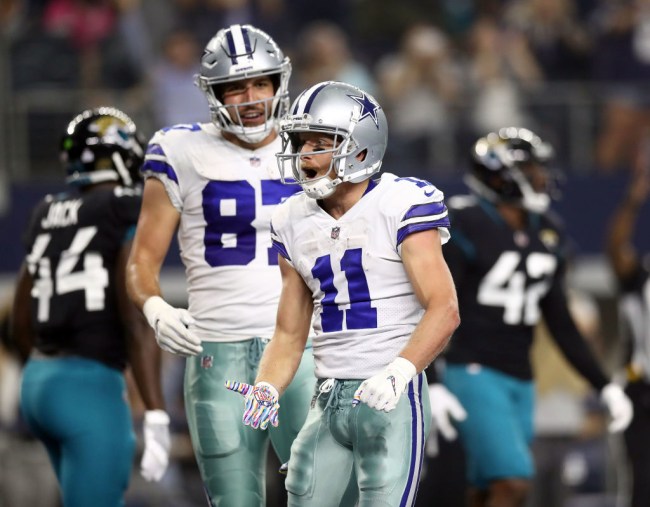 Cowboys receiver Cole Beasley wants you to take him seriously as a rapper. This was evident in the 29-year-old starting his own rap label, ColdNation Records, to release his music. Or back in January when the Houston, Texas native dropped his first rap single called “80 Stings,” which Zeke Elliot described in one word: SAUCE. Beasley told TMZ back in May that he actually considers himself as a rapper who happens to play football.

Beasley, who became the first Cowboys receiver to notch a 100-yard game since November 2017 after hauling in nine passes for 101 yards and two scores in a Jaguars drubbing, was feeling himself this week. So much so that he appeared on K104, a Hip-Hop station in Dallas, to drop a fire freestyle.

Back in May, Beasley released his 46-minute album debut album titled ‘The Autobiography,’ which cracked iTunes’ Top 20 on the first day of its release and was repped by his Cowboy teammates. Well, former Cowboy teammates.

Trying to bump something real? Go get my dawg album now @Bease11 🔥 🔥 🔥 pic.twitter.com/YYsKOuapgr

#ColeBeasley #TheAutobiography
Just ran 8 miles with @Bease11’s new album on loop…
I know he’s a Cowboy, but dude’s got skills!#Stereotypes

It remains to be seen whether or not Beasley will transition into a lucrative rap career during or after his playing days, but if he doesn’t, it won’t be due to lack of trying.