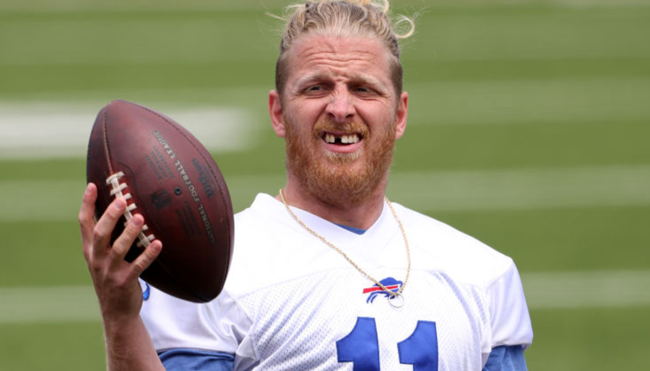 If you’ve been keeping up with Cole Beasley over the course of the NFL offseason, you’re likely well aware that he is not a huge fan of the many safety measures and guidelines instituted in an attempt to curb the pandemic and is very happy to make sure you know exactly how he feels.

The wide receiver made his stance on masks very clear back in May and was less than thrilled when he learned he’d have to wear one thanks to the NFLPA’s rules concerning unvaccinated players. Since then, he’s spent an unhealthy amount of time dreaming up ways to broadcast his anti-vaccine sentiments to the masses, which has led to him publically sparring with a teammate on Twitter and holding a press conference on Wednesday where he claimed he isn’t actually anti-vax but simply pro-choice.

#Bills WR Cole Beasley is talking to reporters now and he starts off by reading a prepared statement. Says he’s not pro or anti-vaccine but that he’s pro-choice. Full video below: pic.twitter.com/C0O39zjaza

Now, I know a lot of people reading this are probably thinking, “Has Beasley’s decision to devote too much of his life to sounding off on social media come at the expense of his burgeoning rap career?” Thankfully, I’m thrilled to confirm the answer is “Absolutely not,” as shortly after he issued the above statement, he jumped on Twitter yet again to promote the release of his newest song.

If the album art didn’t tip you off, the “1s” in question are actually the large testicles he brags about having on a track where he also throws shades at vaccines, saying he’s “too ill to be repaired” and that there “ain’t no vaccination for me, only evacuation save ’em homie” amongst other lyrics I’m not going to waste valuable moments of my life transcribing.

This is your daily reminder that everything is dumb.