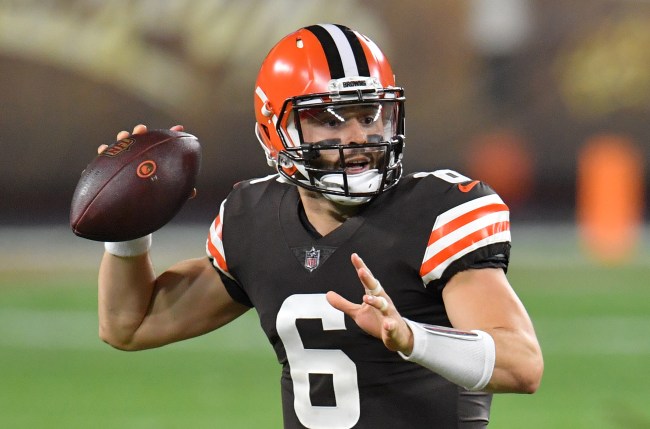 The Colin Cowherd-Baker Mayfield feud is still alive and well this season, guys, with the longtime radio host finding the pettiest of reasons to take a massive shit all over the Cleveland Browns quarterback following Mayfield’s victory over the Cincinnati Bengals on Thursday Night Football. Oh, and for those wondering, the 2018 No. 1 overall pick had a pretty solid game, throwing for 219 yards with two touchdowns, one (pretty bad) interception and recording a passer rating of 110.6.

But, as we all know, even if Mayfield passed for 400 yards with five touchdowns and no picks, Colin Cowherd would still find a reason to take a swipe at the quarterback, as the feud between the two is well-documented, with both doing anything they can to get under the skin of the other. And, as mentioned, here’s Cowherd’s latest cheap shot; which came Thursday night.

Baker Mayfield, who played well, is the 4th best QB in his division.

Cowherd is honestly relentless in his pursuit to piss off Baker Mayfield, and his troll job should be applauded, and this proclamation does follow suit — as the host previously said Bengals quarterback Joe Burrow is already better than Baker. However, unlike years past, it sounds as if the Browns quarterback won’t be firing back at his longtime nemesis, with Mayfield claiming he’s going to leave the chirping for the games. That’s wise, and proves that the signal-caller has learned from previous mistakes of creating more enemies off the field than he needs to.

Although Baker may not fire back a response to his rival, given the obscurity of Cowherd’s latest dig at Mayfield, that didn’t stop some people on Twitter from trying to shutdown the outspoken radio personality. Take a look below at what some on social media were saying.

Guys… burrow threw like 65 times… against what may be the worst defense in the nfl. lets cool it

Did burrow complete any balls 20yd down field?

Cool it, Skip Wannabe 2.0. Its week 2, and everyone knows you hate Baker. Let the kid play before you drag his name through the mud. Burrow, though impressive, has played 2 NFL games. You need some lessons in humility, my guy.

Burrows is better? Lol. He’s going to get all his receivers killed. He doesn’t look down field. Nothing but 5 yard passes with LB’s and safeties looking for kill shots. Burrows = David Carr

And you’re not even a top 100 Sports talk host

We’ve seen the Colin Cowherd-Baker Mayfield feud produce some memorable moments over the years — from the player calling the host a liar, to Cowherd hating Mayfield shotgunning a beer at a baseball game once — and this is just the latest in a longstanding beef between the two. And, sure, Mayfield laid into it during his first couple years in the league by playing antagonist, but getting into a back-and-forth with a wiseass media personality who gets paid to stir up controversy and debate isn’t something an NFL quarterback should be doing. So it’s wise for Baker to sit this one out, let Cowherd piss of fans, and have Mayfield just focus on getting the Browns to the playoffs this season.