The Lakers Trading LeBron James Wouldn’t Be That Big Of A Deal, According To Colin Cowherd 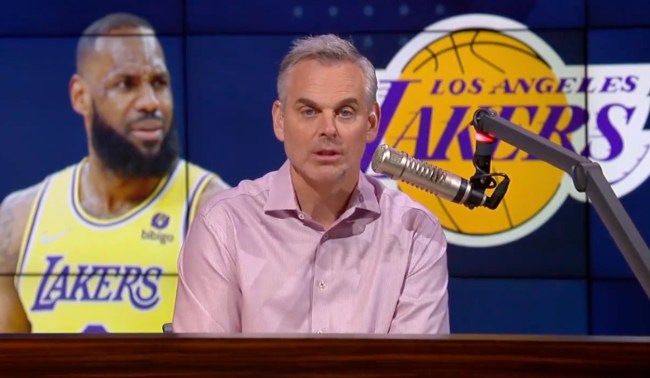 You don’t have to be an NBA insider or someone inside the team’s locker room to see that things aren’t exactly great between LeBron James and the Los Angeles Lakers at the moment.

The Lakers are 27-31 on the year occupying the No. 9 spot in the Western Conference. The Russell Westbrook and the compiling of a roster full of fossils experiments have been a disaster.

James may be having a great season, but he simply has no help, and with the undefeated Father Time creeping closer and closer to him, LeBron isn’t just going to sit around in L.A. and play for a non-playoff team forever.

Having said all that, it should come as no surprise that there have been various reports about James being frustrated with the Lakers’ front office. Bill Oram of The Athletic recently reported that he and his agent, Rich Paul, are “beginning to really squeeze” Lakers management.

James’ future as a Laker is up in the air, at least that’s what’s being spun at the moment, so Colin Cowherd decided to offer up his thoughts on the matter during Wednesday’s edition of ‘The Herd.’

Colin Cowherd Says “So What” If The Lakers Trade LeBron

Cowherd is of the opinion that it wouldn’t be that big of a deal if James was dealt by the Lakers. According to him, Los Angeles always gets “the next guy.”

“I would prefer the Lakers keep LeBron, trade AD, blow it up this offseason,” Cowherd said. “But so what if you have to trade him [LeBron]. LA has a history – we just get the next guy. Kareem, Wilt, Shaq, LeBron. It’s what the city does.”

The Lakers can trade LeBron this offseason and that's OK.

"They have a history. They just get the next guy. Kareem, Wilt, Shaq. It's what the city does." — @ColinCowherd pic.twitter.com/d2FFYXRzmr

Going out and getting “the next guy” to replace LeBron James seems like a pretty tall task given the fact James is arguably the best to ever do it. But according to Cowherd, L.A. simply gets the players it wants.