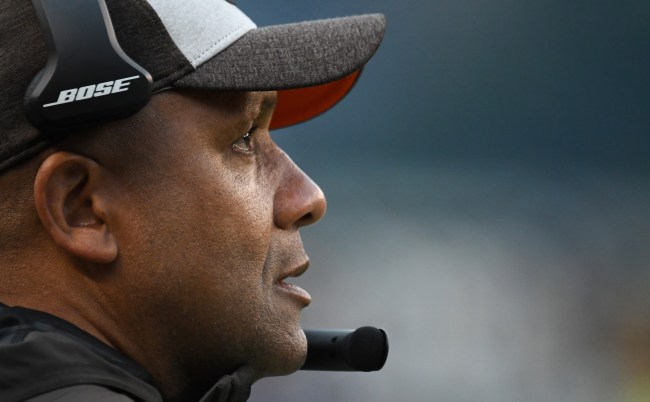 Although Colin Kaepernick hasn’t had many NFL opportunities since he started taking a silent protest in 2016 during the National Anthem before games, the quarterback has tried to return to the league that has seemingly blackballed him over the past few years. Whether it was being brought in for workouts by a handful of franchises, or Kaepernick holding a private workout himself — as he did in the fall of 2019 — the signal-caller is itching to play again.

Well, according to former Cleveland Browns head coach Hue Jackson, had it been up to him, Colin Kaepernick could’ve ended up playing for the beleaguered franchise all the way back in the 2017 season.

Recently appearing as a guest on The Really Big Show with Tony Rizzo and Aaron Goldhammer, Jackson described his stance on Kaepernick during his second season leading the Browns, with the former head coach explaining how he was interested in bringing in the quarterback to the team — but the final decision wasn’t his to be made.

“I wanted him,” Jackson said. “It just didn’t work out. Obviously, those things do have to work from a finance, draft, whatever all that is. And that wasn’t my decision.

“I’ve known Colin. When I was with the Raiders (2011), we were going to draft him when I was there. So, obviously he’d been a really good player in the league. He had tremendous success. He is a guy who has stood for something. I think everybody is seeing exactly where he was coming from … I always thought Colin deserved an opportunity in this league, but he has to want to play. If he really wanted to play, I think he would have a chance again.”

Considering the Browns went an abysmal 0-16 during the 2017 season, it’s probably safe to assume Colin Kaepernick could’ve helped the team win a few games. Remember, the guy did lead the San Francisco 49ers to a Super Bowl appearance during the 2012 season, so he clearly had talent. Plus, he would’ve been a better option than the guys Cleveland rolled out during that winless campaign.

While it’s uncertain what the future holds for Kaepernick, there’s been some recent discussion that he could have an opportunity now that the NFL is speaking up about some of the protests happening around the country, with Commissioner Roger Goodell recently apologizing for not listening to players years ago. Here’s what Mark Maske of The Washington Post recently tweeted about the possibility of Kaepernick potentially being signed by a team.

The league is not likely to do anything like last year's failed workout negotiations to try to have Colin Kaepernick signed by a team, a source said. But there are increased hopes by some in and around the NFL that circumstances are more favorable for a team to sign Kaepernick.

Who knows how close Hue Jackson and the Browns actually were to ever seriously considering Colin Kaepernick as an option in 2017. But the fact that the worst team in the league at the time couldn’t even find a reason to add him to the roster speaks to how far the guy has fallen — and that doesn’t seem to bode well for his future in the league.