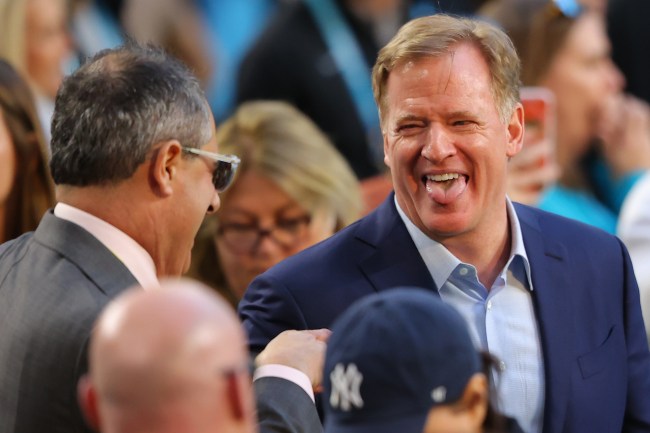 NFL Commissioner Roger Goodell has finally made a public statement about some of the racial injustice that has gone on over the past couple of weeks since the senseless murder of George Floyd by four Minneapolis police officers; but it’s not necessarily as genuine as one might expect.

Addressing social media from the official NFL account, Goodell talked about the league bring “wrong for not listening to NFL players earlier” while they peacefully protested police brutality years ago. Among those players was Colin Kaepernick, who was all but blackballed by the league for his silent protest of kneeling during the National Anthem — however, Roger Goodell didn’t mention his name during the posted apology Friday afternoon.

See below to view the Commissioner’s video.

The statement from Roger Goodell comes in the wake of a powerful anti-racism video that several superstar players released, with the message loud and clear to the league: Black Lives Matter.

Players, we hear you. #StrongerTogether pic.twitter.com/UJvS7AP0an

Goodell’s apology is also the first time he admitted to taking responsibility for ignoring Kaepernick, and other players’, pleas to try and work towards equality. It also comes on the heels of statements from people like former tight end Martellus Bennett, who ripped the league for having lots of racism, and current Denver Broncos head coach Vic Fangio, who claimed he doesn’t see racism in the league at all; which he then backpedaled on.

Even with Goodell’s apology, people on Twitter were highly critical of the Commissioner — especially since he never mentioned Colin Kaepernick’s name.

You should personally apologize to @Kaepernick7, start hiring more black coaches and put your money where your mouth is. Actions speak louder than words.

The only reason you actually made this speech: pic.twitter.com/sh8oDkHyYt

Who knows what comes next for the NFL, but, at the very least, Roger Goodell is taking some responsibility for turning a blind eye on guys like Kaepernick who tried to peacefully protest. Whether or not the league goes further to make changes in the near future is yet to be seen, though.