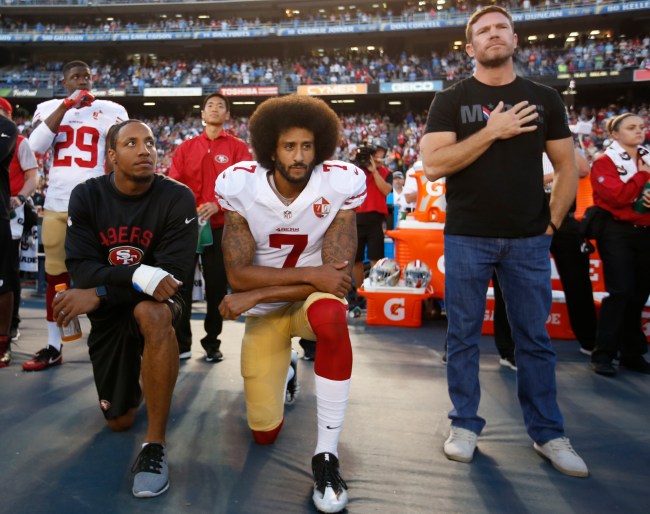 On Wednesday, Drew Brees gave his take on players kneeling during the national anthem.

The world ripped into the Saints quarterback. Michael Thomas was livid, Malcolm Jenkins told him to shut up, Stephen Jackson drew a line in the sand (no pun intended), Saints fans burned his jersey, and even LeBron James spoke his peace.

Brees apologized the next day, but the damage was already done. As if the world needed more damage.

Boyer worked with Colin Kaepernick and advised the San Francisco quarterback to kneel during the national anthem as a way to protest social injustices during the 2016 season. Before the advice, Kaepernick was sitting quietly on the bench.

Boyer, former Texas long snapper and briefly played for the Seattle Seahawks, discussed the Brees incident on 97.3 The Fan in San Diego. Boyers feels that Brees didn’t mean to “ostracize himself” with his feelings on kneeling.

“I’ll just speak on the Drew Brees thing really quickly — he’s a really good dude, man. He does a lot for the city of New Orleans, for the community, whether it’s post-Katrina or helping secure voting rights for formerly incarcerated people in Louisiana — he helped lead that charge with some of the Saints’ players.

Even what he said in his response, well, he said what he said, so I don’t know what he meant exactly. But I absolutely don’t think he meant to ostracize himself or make this issue about something that it’s not.

“But the fact of the matter is that we’ve gotta — for these guys that are working really hard in the league, a lot of these players — make sure that the narrative is understood that the protests are about racial inequality, social injustice, and police brutality and that kneeling during the anthem was a mechanism to raise that attention and to get those voices heard.

Brees’ stated in his apology that feelings on the issue had to do with the sacrifices many Americans — including his two grandfathers who fought in World War II — have made for the country.

“Oftentimes during the national anthem,” Brees said, “I gets emotional and overwhelmed thinking about it.”

Boyer told the 97.3 hosts that he understands that stance, but that doesn’t mean that the feeling “is universal” and that Brees and millions of others need to understand that part.

“But if other people don’t feel the same way, it’s just that acknowledgment and understanding that, ‘Hey, I’ll stand for you, and until you feel that way, maybe you shouldn’t. But when you do, I’m looking forward to the day that you feel the same way that I do and I’ll keep fighting to make it happen until that day comes.’”

Boyer said there has been plenty of progress on the issues of race and civil rights in the United States, but it’s clear that there is still work to be done.