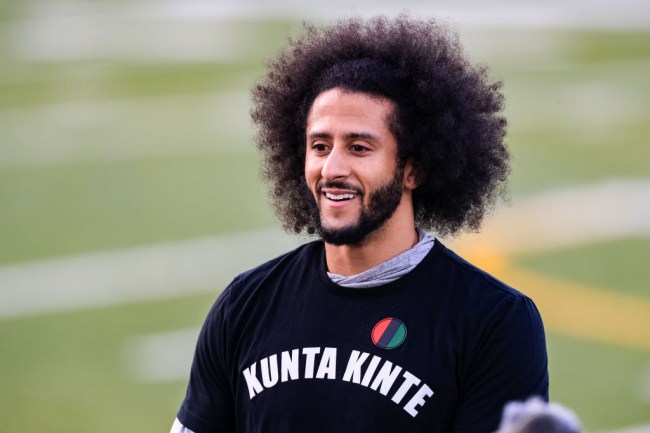 It has been over three years since Colin Kaepernick began kneeling during the National Anthem as a form of protest, yet the fallout is still lingering. A Marine veteran and former NFL player has weighed in on the situation and called Kaepernick a “national disgrace” who is “extorting the Black community.”

Jeremy Staat is a Marine veteran who joined the Marine Corps in 2006 and deployed to Iraq the following year. Staat played football at Arizona State, where he became great friends with his teammate, the late Pat Tillman.

Staat was drafted by the Pittsburgh Steelers with the 41st overall pick in the 1998 NFL Draft. Jeremy played in 31 games in four seasons in his NFL career. He then played for the Los Angeles Avengers of the Arena Football League.

Tillman, who retired from the Arizona Cardinals to enlist in the United States Army following the 9/11 terror attacks. Tillman, who was a member of the Army Rangers, was killed by friendly fire will serving in Afghanistan.

Tillman’s death hit Staat hard and made him believe there was more to life than football. Staat followed in Tillman’s footsteps and enlisted in the United States Marine Corps.

After serving in Iraq, Staat returned to Arizona State in 2009 to get his master’s degree. Now, Staat is running for Congress in California’s 8th District. Possibly to drum up publicity for his political campaign, Staat has voiced his opinions on the Kaepernick situation.

During a recent Fox & Friends interview, Staat railed against Kaepernick’s activism that started when he was kneeling on the sidelines during the National Anthem.

“[Kaepernick] knew what he was getting into when he decided to kneel, and now he’s going to go ahead and capitalize” on his decision,” Staat said of the QB’s protest.

Staat added that Kaepernick is a “national disgrace,” and he’s “tired of seeing him celebrated like he’s a hero.” The Marine vet said Kaep is “pulling the racism and victim card.”

Staat accused Kaepernick of “essentially extorting the black community and using Nike as his little shiny horse, if you will, to ride in on.”

Staat has been vehemently against Nike’s ad campaign featuring Kaepernick since it was launched last September. But Staat doesn’t believe Tillman’s death should be politicized or marketed in an ad campaign.

KAEPERNICK OR TILLMAN? Nike's new ad shows #ColinKaepernick w/ words "Believe in something. Even if it means sacrificing everything" Many say it should've featured #PatTillman who died serving overseas. But his former teammate @jeremystaat says leave Pat out of politics #azfamily pic.twitter.com/d0rotRreGi

Kaepernick’s “Believe in something, even if it means sacrificing everything” Nike campaign is said to pay the former San Francisco 49ers quarterback “millions.”

Details on Kaepernick and #Nike:

– It’s wide endorsement. He’s going to have his own branded line. Shoes, shirts, jerseys, etc. There will be Kaepernick apparel.

– Contract is a “star” deal on par with a top end #NFL player. Millions per year. Star deals also include royalties.

In addition to his Nike salary, Kaepernick received a settlement from the NFL that was reportedly around $10 million. Colin Kaepernick has a net worth of $20 million.

Colin Kaepernick and Eric Reid will reportedly receive less than $10 million in their settlement with the NFL https://t.co/A2Iwn3bjEo

This comes a week after Kaepernick attended the “Unthanksgiving” event on Alcatraz Island and made emotive comments about the United States government.

On Thanksgiving, Kaepernick spoke at the “Indigenous People’s Sunrise Ceremony” and said, “the US government has stolen over 1.5 billion acres of land from Indigenous people.”

Spent the morning at the Indigenous People’s Sunrise Ceremony on the 50 year anniversary of the Occupation of Alcatraz. The US government has stolen over 1.5 billion acres of land from Indigenous people. Thank you to my Indigenous family, I’m with you today and always.✊🏽 pic.twitter.com/6cTuktUlQN