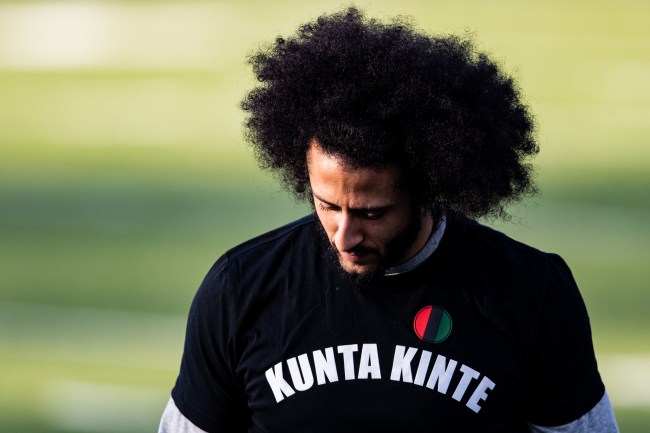 The NFL playoffs started on Saturday, unfortunately for Colin Kaepernick, he was not on the roster of any NFL team in 2019. But the silver lining of the 32-year-old Kaepernick not putting on an NFL jersey since he opted out of the final season of his contract with the San Francisco 49ers to become a professional activist is that he has plenty of time to opine on identity politics and geopolitical affairs.

On Saturday, while the first games of the 2019 NFL playoffs began, Kaepernick went to his keyboard to give his opinion on the escalating situation between the United States and Iran.

Soleimani was the leader of IRGC’s clandestine Quds Force for over 20 years, which saw operations inside of India, Afghanistan, Syria. A U.S. State Department report estimated that Iran’s Islamic Revolutionary Guard Corps was responsible for 603 casualties or roughly 17% of all U.S. personnel deaths in Iraq between 2003 to 2011.

The Obama Administration thwarted an October 2011 attempt by Soleimani’s Quds Force to assassinate Saudi Arabia’s Ambassador to the United States Adel al-Jubeir. The Iranian plan involved hiring a Mexican cartel member to detonate a bomb at Cafe Milano to kill the Saudi diplomat as well as any innocent Americans who were in the Italian restaurant or immediate vicinity.

U.S. government officials allege that Soleimani and his secret forces were in Iraq “plotting imminent and sinister attacks on American diplomats and military personnel,” as reported by Reuters. “We took action last night to stop a war,” President Donald Trump said. “We did not take action to start a war.”

On December 27, 2019, Iraqi Shia paramilitary group Kataib Hezbollah, which has ties to the IRGC, fired over 30 rockets at the K-1 Iraqi airbase in Kirkuk, where American forces are stationed and are actively training Peshmerga military forces. A U.S. contractor was killed in the attack, and several Iraqi and American soldiers were wounded.

On December 31, 2019, the U.S. embassy in Baghdad was attacked by supporters of Hashd-al-Shabi, an Iraqi militia that was launched and supported by Soleimani’s IRGC. The “demonstration” at the U.S. embassy in Iraq was about a U.S. airstrike on December 27 that killed 25, but the airstrike was retaliation for the rocket attack on the K-1 base on the same day. The protests were violent as the militia attempted to set the embassy on fire and tried to storm the embassy to capture or kill the American diplomats and soldiers that were inside.

On January 2, 2020, the United States sought revenge for the embassy attack by targeting 62-year-old General Qasem Soleimani. After he flew into the Baghdad International Airport at 1:00 a.m., American drones fired missiles at Soleimani’s motorcade. The general and four members of the Popular Mobilization Forces (PMF), including their military commander, Abu Mahdi al-Muhandis, were killed.

Kapernick took to his Twitter account to give his expert opinion on the complex and continually developing situation. “There is nothing new about American terrorist attacks against Black and Brown people for the expansion of American imperialism,” Kaepernick wrote on Twitter.

There is nothing new about American terrorist attacks against Black and Brown people for the expansion of American imperialism.

Kaep followed that tweet with another slam on the United States. “America has always sanctioned and besieged Black and Brown bodies both at home and abroad,” the former football quarterback wrote. “America militarism is the weapon wielded by American imperialism, to enforce its policing and plundering of the non white world.”

America has always sanctioned and besieged Black and Brown bodies both at home and abroad. America militarism is the weapon wielded by American imperialism, to enforce its policing and plundering of the non white world.

It should be noted that Iran has killed many more innocent Iranians than the United States ever has. In mid-November of 2019, an estimated 1,500 citizens were murdered by the Iranian government in a tyrannical crackdown on political protests. The death toll included at least 17 teenagers and approximately 400 women as well members of government security forces and police, according to three Iranian interior ministry officials. The recent killing of Iranian citizens is believed to be the bloodiest political massacre in the country since the Islamic Revolution in 1979.

The protests stemmed from a massive increase in fuel taxes, which many Iranians tied to infuriating government corruption and mismanagement, including proxy wars around the Middle East. On the second day of the nationwide protests, Khamenei reportedly met with President Hassan Rouhani and told him: “The Islamic Republic is in danger. Do whatever it takes to end it. You have my order.”

Iran reportedly killed 30,000 of its own citizens in 1988 for engaging in political protests. Political prisoners were allegedly “loaded into forklift trucks in groups of six and hanged from cranes in half-hour intervals.”

RELATED: Roger Goodell: Colin Kaepernick Was Given ‘Credible Opportunity, He Chose Not To Take It,’ And The NFL Has ‘Moved On’