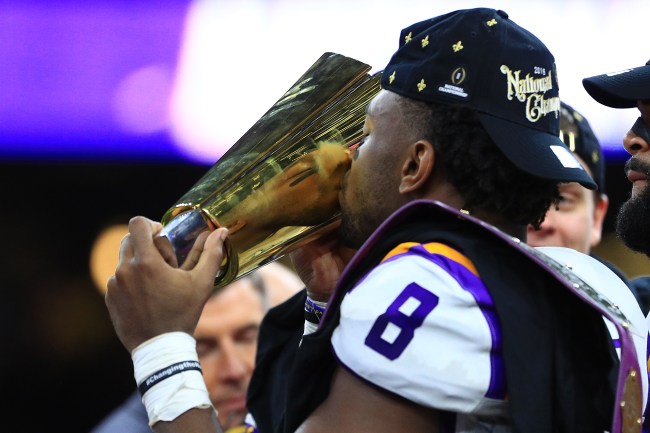 With the college football season pretty much back in action — as every Power 5 conference is now playing some sort of fall schedule following the Pac-12’s announcement Thursday — it’s time to sit back each Saturday and take it all in as we normally would. Even in the middle of a pandemic, where the entire year has thrown us for a curveball, here we are in late-September doing what we do best: Watching football.

Although this season is still going to be a little strange with limited (or no) fans in the stadiums and pretty much zero tailgating, let’s not be too upset about this, guys, because college football’s back and we should all be fucking stoked. If you aren’t, you might need to check your pulse.

And because no sports season can be complete without predictions, ESPN decided to simulate the entire 2020 college football season using its Football Power Index (FPI) in hopes of determining a national champion. The result? Some serious surprises, with a return to glory for one iconic program.

That’s because, according to ESPN’s FPI, the Florida Gators will be crowned as national champs this upcoming season. Seeing as how the SEC East team is currently a +2000 on BetMGM, I’m just going to go ahead and put a cool hundo down on Dan Mullen’s squad to get the job done this season — because who the fuck doesn’t want to win a couple thousand for doing nothing, right?

In addition to the Gators winning the whole thing, here’s how ESPN’s FPI predicts the entire College Football Playoff going down this season.

While it’s surprising to see the Gators predicted to win the ‘ship this season by ESPN’s FPI, it wouldn’t be the most shocking thing we’ve ever seen. In fact, Florida’s +2000 odds on BetMGM are currently the fifth-best among college football teams, trailing only Clemson, Ohio State, Bama and Georgia, so, hey, it could realistically happen.

Dan Mullen has guided Florida to 10 and 11 wins, respectively, since taking over the program prior to the 2018 season, so he’s got the Gators on the right trajectory. With a good blend of returning starters and fresh talent via recruiting, seeing the SEC East team hoist the College Football National Championship trophy by season’s end may actually become a reality. It’d be the first national title for the program since 2008, and, assuming I drop $100 on it to happen, would be my first time winning $2,000 on sports gambling. Let’s fucking go!