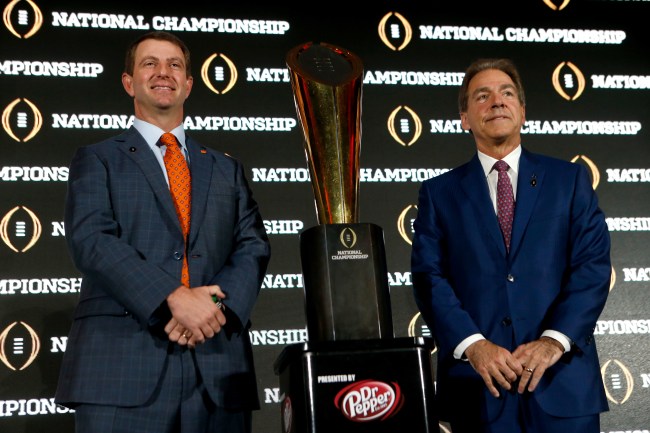 College football is big business, as it brings in hundreds of millions of dollars each year for universities through things like TV contracts, ticket sales, merchandise and other licensing and sponsorship opportunities. Unfortunately, as much revenue as it generates, student athletes still aren’t getting a slice of the pie — although the state of California is trying to change that with the “Fair Pay for Play” Act — meaning there’s a ton of cash for college football head coaches to rake in piles of cash.

Just how much do college football coaches actually make, though? Surprisingly, just as much, if not more, as their NFL counterparts. Considering head coaches in the college game are like full-time CEOs, tasked with recruiting year-round, disciplining 80+ teenagers and young adults, and then actually going out and performing at a high level, it kind of makes sense that universities pay these guys so damn much.

But who’s the highest-paid college football coach in America this year? Thanks to new, recently released data, we have an understanding.

As it does every year around this time USA Today revealed the salaries of college football coaches around the country, giving fans an idea at how much their favorite team (and rival’s) coach is earning. Take a look below at the top-10 highest-paid college football coaches in 2019 in terms of total pay, as well as the ones who are on the short end when it comes to salaries — but, don’t worry, because their still making tons of dough.

It’s not too surprising to see names like Dabo Swinney of Clemson, Nick Saban of Alabama and Lincoln Riley of Oklahoma in that top-10; considering they’ve guided their teams to the College Football Playoff the past couple seasons, while establishing themselves as the premier programs in the nation. However, names like Jeff Brohm at Purdue and even Dan Mullen at Florida might be a bit of shock.

As for those coaches who are working their way towards a seven-figure salary, here are five college football head coaches who ranked at the bottom of the barrel in terms of annual salary. Again, don’t feel sorry for these guys, because the amount of money they’re earning in a year is still more than most of us will ever make.

Given the fact the schools above don’t have the big budgets, nor have the success, that some other universities have, it’s understandable that the head coaches aren’t stashing cash away. But, hey, Nick Saban started at Kent State years ago and has become the GOAT of college football coaches, so who’s to say one of the guys above isn’t the second-coming, right?

To see the full list of college football salaries for this season, head on over to USA Today.