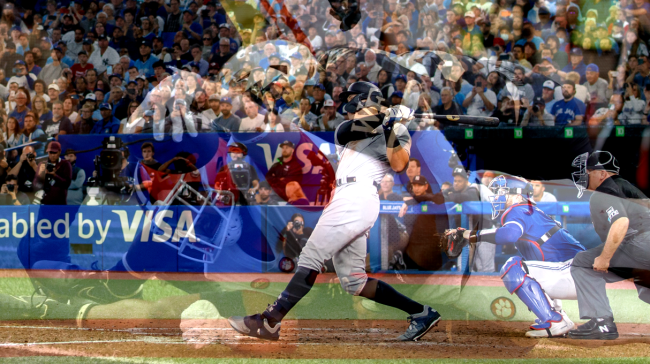 As many, MANY sports fans noticed last Saturday, ESPN kept cutting in with Aaron Judge at bats during their college football broadcasts.

Judge was chasing, and not succeeding in reaching, Roger Maris’ 61 year-old American League home run record of 61 home runs in a single season. (Or is it the MLB single season record?)

The Yankees slugger ended up getting four plate appearances last Saturday in the game versus the Boston Red Sox and ended up going 0-for-3 with a walk and two strikeouts.

It took Judge until the 7th inning of Wednesday night’s game to finally reach that magical mark.

In fact, he went seven straight games without hitting home run number 61. So the odds of him hitting number 62 this coming Saturday against the Baltimore Orioles aren’t that great. (The Yankees also play the O’s Friday night, so there is a chance he breaks the record before the weekend.)

The Yankees game on Saturday is set for a 12:05 p.m. ET first pitch, right in the middle of the #18 Oklahoma vs. TCU college football game on ESPN 3, Purdue vs. #21 Minnesota on ESPN 2, as well as Texas Tech vs. #25 Kansas State and numerous other lower profile games on ESPN+.

More importantly, Judge and the Yankees will be playing during the game between #7 Kentucky and #14 Ole Miss over on ESPN. Something that is not going unnoticed by college football fans.

“All three Yankee games this weekend will also be on MLBN outside of the YES footprint,” New York Post sports media columnist Andrew Marchand tweeted on Thursday. “ESPN will also have cut ins. Good job by MLB, basically making Aaron Judge’s potential 62nd homer available as many places as it can.”

Just don’t tell that to all the college football fans who will be watching the ESPN family of channels on Saturday.

“I think you have a typo in this tweet. You wrote ‘good job by MLB’ when I think you meant to type ‘This sucks,'” one fan tweeted back at Marchand.

So the four letter is going to ruin perfectly good football with baseball because they believe the football fans prefer to watch baseball but just forgot to change the station?

“If I miss one single second of any college football game because some brodio wants to hit a ball far when he isn’t even the person who hit the ball far the most times I will lose whatever is left of my mind,” another commented.

If people wanted to see judge hit during a critical third and 10 late in the game, they would have just put the Yankees game on to begin with. Everyone watching a football game instead of judge would much rather just see it on Twitter 10 minutes after it happens than this crap

“It’ll be inspiring to have what I actually want to watch interrupted by someone trying to move to 11 HRs behind the recordholder,” tweeted another.

On behalf of all college football fans, allow me to extend the middle finger to @ESPN. If I wanted to watch baseball... I'd be watching baseball.

Okay, but how do all you college football fans really feel about ESPN’s Aaron Judge cut-ins during games?