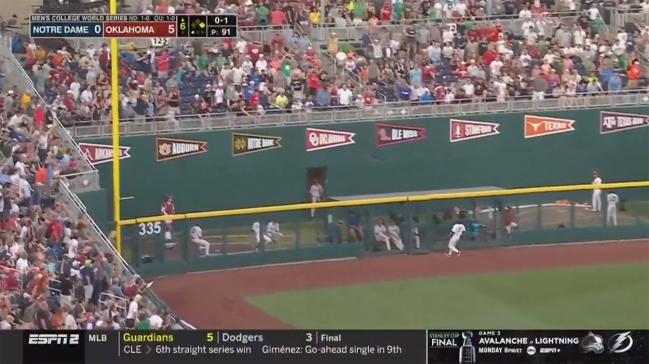 Oklahoma baseball dominated its second game of the College World Series. But one of the Sooners almost had an ill-timed fate.

During the top of the sixth inning, Notre Dame slugger David Iamanna got ahold of an 0-1 pitch. He sent a two-run blast into the left field bullpen, which was occupied by his opponents.

The home run cut the five-run lead to three, and didn’t end up making a difference in the final score, but it made for a hilarious moment. As the dinger landed 10-feet deep into the bullpen, an Oklahoma pitcher walked out of the door in the left field wall.

The timing couldn’t be funnier. The Sooners player literally opened the door and emerged from the wall right as the ball nearly hit him in the head.

Now, we don’t know what the Oklahoma pitcher was up to. However, former Virginia closer Stephen Schoch knows a thing or two about what goes on at a baseball diamond. He hypothesized that he was using the bathroom, and based on the video, it’s very possible that he was making some post-restroom adjustments as he walked out.

Here’s another look at the incredibly funny timing of the home run. It really couldn’t have been better.

Tough time to come out from the bullpen shitter pic.twitter.com/YBMzxHSvMr

The Oklahoma pitcher appeared to avoid the ball, and it’s hard to tell but the ball either landed right in front of him or hit off of the wall on top of the doorframe. Even the broadcast took notice of the incredible sequence of events.

Here’s another angle but this is an absolutely ridiculous thing to happen. What are the odds pic.twitter.com/L7b6JVl0Ib

The Sooners went on to win the game and stay atop of the winner’s bracket.