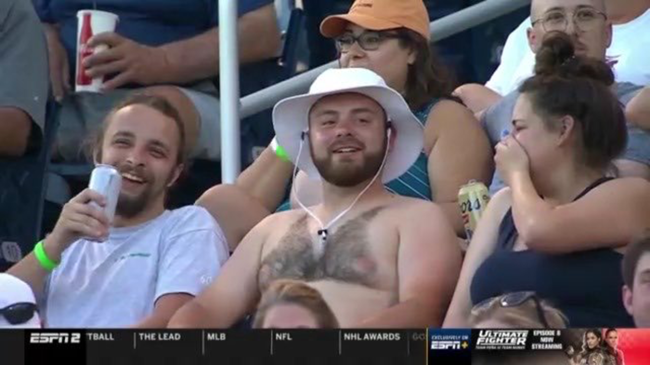 The chest hair bikini — known as the ‘Mankini’ — is a classic. Rarely, however, does it get national airtime like it did at the College World Series this week.

On Monday night, as Arkansas and Auburn squared off in an elimination game, the ESPN cameras cut to the stands. It showed one man — nay, one legend — donning the most unique top in all of Charles Schwab Stadium.

Well, actually, he wasn’t wearing a top at all. The fan, named Tim, went with the chest hair bikini top.

And now we have a man who’s shaved his chest hair in the shape of a sports bra. #CWS is bringing it tonight pic.twitter.com/tRX3B6CPwR

Throughout the night, as the game quickly became a blowout in favor of the Hogs, Tim took over the broadcast.

When she tells you to wear something nice for date night. 🤣#MCWS pic.twitter.com/qisQapQpTq

He even had fans coming up to him throughout the game to take photos.

This fan's look was priceless pic.twitter.com/eXwU3Gmw7k

Tim, who will forever go down in history as a legend and was seated next to his fiancée, explained the process behind his Mankini decision and it was fairly simple. He knew he was going to be behind the first base line at the College World Series and thought it would be fun to shave his chest hair like a bikini top.

While discussing the decision to show up in the Mankini, Tim made it very clear that he enjoys a good adult beverage and shotgunned what appeared to be a White Claw. He said it was “like his fifth,” which is quite a few shotguns in a nine-inning game.

“I got like an A cup, kinda.” Meet the man who shaved his chest hair into a bikini top. 🎥 @nickluttie pic.twitter.com/iD71f2YCJc

By the end of the night, Tim was all over social media. And on his way out of the stadium, he received a standing ovation from those seated around him. What a legend!