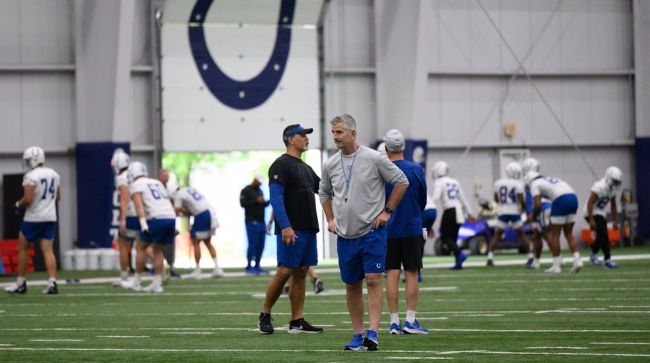 Indianapolis Colts head coach Frank Reich is already big-upping his new quarterback Matt Ryan, as the fifth-year head coach told reporters in Indy on Wednesday that he’s been blown away by Ryan’s early performances at OTAs. Not only that, but Reich also compared Ryan to recent Indy QBs Peyton Manning and Philip Rivers.

“I always knew he was a great passer, but his accuracy is insane,” Reich said.

Reich said Ryan’s passing accuracy reminds him of Peyton Manning and Philip Rivers, and Reich called the time he has spent with Ryan so far “incredibly eye-opening.” [via ProFootballTalk]

While Reich is obviously gassed that Ryan, a former league MVP, is his team’s new quarterback, it’s hard not to imagine that the departure of Carson Wentz isn’t playing into the 60-year-old’s enthusiasm about his new signal-caller.

After trading for Wentz in March of 2021, the Colts shipped the former #2 overall pick and Philadelphia Eagle out of town in less than a calendar year, offloading him to the Washington Commanders for less than they paid for him.

While those above stat lines may be similar, the fact is that Ryan has proven to be a quality NFL starter over the course of a 14-year-career. Wentz, on the other hand, had about three months where we played at franchise QB caliber before ultimately getting hurt and ceding control of the Eagles offense to Nick Foles. And we all know what happened after that.