Conor McGregor Just Did a New Burger King Commercial And Wow, He Really Cannot Act At All 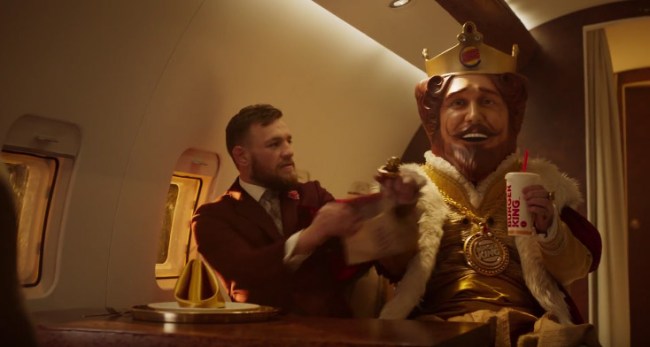 For some reason, Burger King hired Conor McGregor to do a new commercial for them despite the fact that he cannot act… AT ALL. There will definitely not be a WWE contract in his future. Which is only ONE of the reasons why I don’t understand this pairing.

Before signing McGregor as a pitchman did Burger King execs not see the ad “The Notorious One” did after the FIGHT OF THE CENTURY versus Floyd Mayweather for a toothpaste company? You know, the one that was so cringe-worthy even Rocky Balboa thought it was bad?

Yea it was definitely read off Cue Cards pic.twitter.com/dyMSxFGtks

Maybe Burger King knew the obvious, that having Conor McGregor as a spokesperson for their all new Spicy Crispy Chicken Sandwich would make us cringe so much that we couldn’t help but take notice and share. If so, it’s a genius move because, well… here we are… watching their commercial.

I mean, they had to do SOMETHING after being pummeled by Wendy’s Twitter account, right? Maybe they just thought what Bill Burr did awhile back. That McGregor and The King are long-lost twins.

There are two kings in this picture and only one in the fight game. Forget the rest. Big news on the way. @burgerking. #ad pic.twitter.com/aayNQuFDxP

Frankly, considering how much Burger King Mayweather ate while he trained for his fight with McGregor, I can’t believe they didn’t hire him.

.. this is the weirdest collab ever..