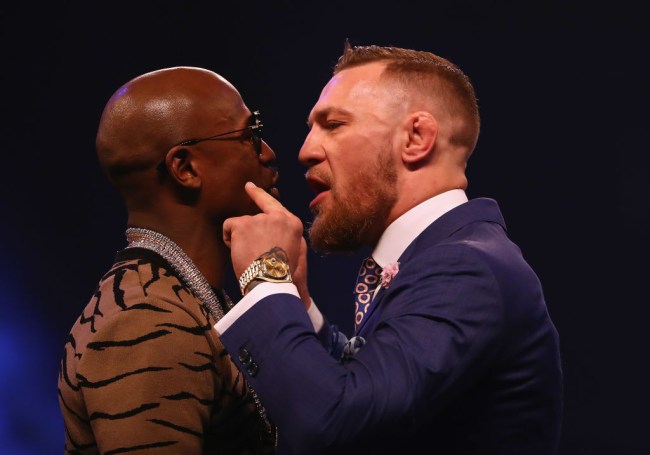 Yesterday, the Nevada State Athletic Commission gave Conor McGregor and Floyd Mayweather permission to fight with 8 oz gloves— a lighter weight than boxers in their weight class are normally permitted to fight with. McGregor’s coach John Kavanaugh said this decision could lead to the converted boxer knocking out his undefeated opponent out in the first round, a prophecy that will almost assuredly go unfulfilled.

McGregor appeared on Conan last night, and the Irishman sat down with everyone’s favorite red-headed late night host to discuss the fight. McGregor didn’t take long to get to the heart of the matter, as the two men barely had time to exchange pleasantries before he said that he was confident he’d be able to knock out Mayweather within four rounds— a proclamation that was met with a smattering of cheers and a palpable amount of skepticism from the crowd.

McGregor had originally appeared on Conan two years ago and discussed the prospect of the upcoming fight before it was even close to becoming a reality. At the time, McGregor said, “Who would not like to dance around the ring for $180 million?” However, during last night’s appearance, he made it very clear that there would be no dancing in the upcoming bout, saying:

“He says he’ll come toward me. I said I’ll go towards him. We’re going to find out pretty early who is telling the truth. So we’ll see who takes a back step first. I am excited for the contest and I will go forward and put him away.”

It’s worth remembering that Mayweather opened as a -2250 favorite when the fight was officially announced, a number that quickly fell as people scrambled to place their bets on McGregor by convincing themselves that anything is possible in pursuit of a payday.

Regardless of the outcome, this fight will prove that the ability to promote is one of the most valuable skills a boxer can possess.