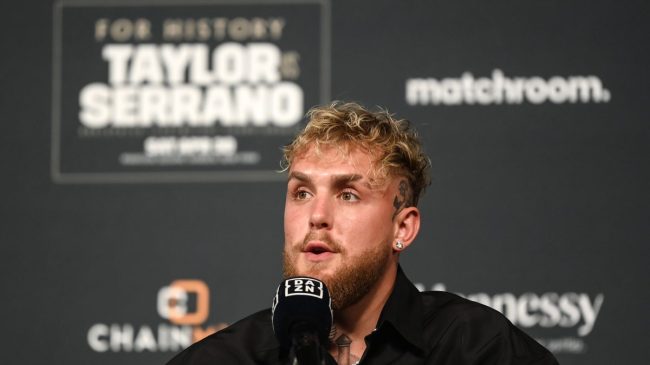 Conor McGregor and Jake Paul are back at it.

The two fighters got into a heated social media exchange over the weekend with Paul promoting the boxing matchup between Amanda Serrano and top-ranked Katie Taylor.

The Irish-born Taylor ended up winning the fight, with Paul making an appearance post-match to speak on the effort given by his boxer, Serrano.

The finish to the bout was highly entertaining, and while the night should’ve been about the impressive performance of the female boxers, McGregor found a way to put the spotlight back on Paul.

After the fight, McGregor took an unprovoked jab at the boxer, which set off an exchange on social media.

Who the fuck is this jackass in the pink Jimmy saville glasses ?

It didn’t take long for Paul to bark back.

the one who isn’t owned by Dana White

the one who made the fight you just watched happen

the 1 who got your hero Katie Taylor paid

Paul notes his contributions to the boxing industry, while also taking a shot at McGregor’s recent lack of success.

“I’m the one who has done more for fighters than you ever have. The one who has won 5 fights in the last 2 years while you have lost 5.”

McGregor continued with the Savile comparison with simply a picture.

These two have had bad blood for some time now.

Paul has accused McGregor of ducking fights that the two sides have agreed upon. He’s also bashed both McGregor’s fighting abilities and his wife in an attempt to ruffle feathers.

At some point, we’ll probably see these two square off in the ring. Until then, we’ll just have to enjoy the back and forth on social media.