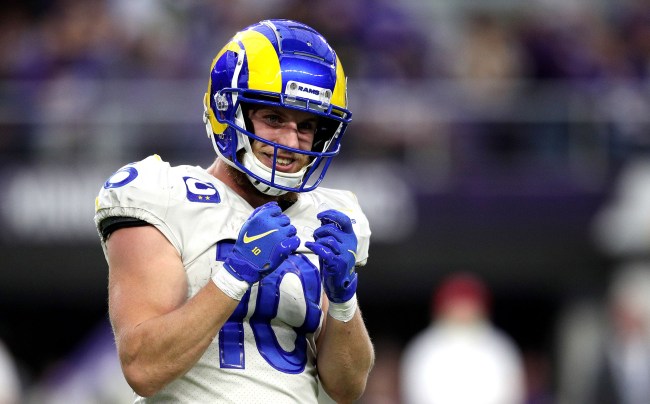 Los Angeles Rams wide receiver Cooper Kupp is having a year for the record books. Literally. The 28-year-old third round pick out of Eastern Washington has a good shot at setting new records for receiving yards as well as number of receptions in a single season.

Kupp currently sits at 138 receptions for 1,829 yards after 16 games. This is where the problem lies.

According to the man himself, it should, but there needs to be some delineation.

“In all honesty, in my opinion, we’re in a very unique season. We’re the longest football season ever played,” Kupp said on Monday.

“What the guys did that set those records, Mike Thomas, Randy Moss for the touchdowns, what Calvin Johnson did with the yards. What those guys did in 16 games, it wouldn’t seem right to, I don’t know, for those to be broken in 17 games. It wouldn’t hold the same weight to me as it does for guys that have done that in a 16 game season and the accomplishments that those guys had and the seasons those guys put together.

“Those are incredible things, incredible accomplishments. You kind of have to separate the two.

One mark that would still apply, despite the new 17 game schedule, would be if Cooper Kupp can lead the NFL in receptions, receiving yards, and receiving touchdowns. Only Jerry Rice (1990), Sterling Sharpe (1992) and Steve Smith (2005) have ever been able to reach that achievement.

“It would be a pretty incredible thing. There are a lot of good football players in this league, a lot of really good receivers who I’ve got a ton of respect for, so it would be very cool,” Kupp said of possibly taking the receiving “Triple Crown.”

Kupp, of course, says his “priorities are going out and winning this game this week, whatever it takes to win it.”

His coach Sean McVay is also following that plan, but says he will be keeping Cooper Kupp’s potentially historical status in the back of his mind.

“I think that’s something that I think you definitely want to kind of be open-minded where you’d never close the door on it, but not at the expense of potentially losing him too,” said McVay. “And so, all those things are up in the air. I wouldn’t pigeonhole myself into kind of one standard operating approach.”

Kupp currently leads the NFL in all three “Triple Crown” receiving categories. He has two more touchdowns than next on the list, Ja’Marr Chase, 320 yards more than Justin Jefferson, and 19 more receptions than Davante Adams heading into Week 17.