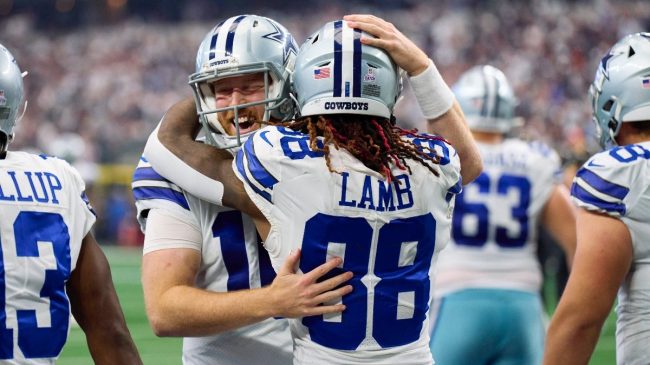 The Dallas Cowboys find themselves with a 3-1 record battling for the top seed in the NFC East. It’s been amazing to see, especially considering they’ve done well without Dak Prescott. Cooper Rush has certainly caught some attention and apparently broke a franchise record on Sunday. With that in mind, this bonkers stat will only add fuel to the quarterback controversy talks within the organization.

Rush currently has four career starts with the Cowboys and has won each of those games. According to Sports Illustrated, he’s the first quarterback in franchise history to achieve this feat. Considering the organization has been led by Troy Aikman, Tony Romo, Dak Prescott, and others, it’s kind of wild that Cooper Rush now holds this record.

Jerry Jones has hyped up a potential quarterback controversy in Dallas, even though it riles up Cowboys fans. Although Rush is playing well and earned his spot in franchise history, the starting job still likely belongs to Dak Prescott.

Cooper Rush has been a savior filling in, as the team’s playoff hopes remain alive. He’s been impressive so far but we should expect to see Prescott under center once his thumb heals up from surgery. However, it’s still cool to see Rush break a Cowboys franchise record as the backup quarterback on the roster.

Dallas is hopeful for Prescott to return in Week 5, however, that is not a guarantee just yet. The coaching staff should consider letting their starting quarterback have the time to fully heal, considering how well Cooper Rush is playing right now. Keep a close eye on this quarterback situation, as more updates regarding Dak Prescott will surely come to light leading up to the game.