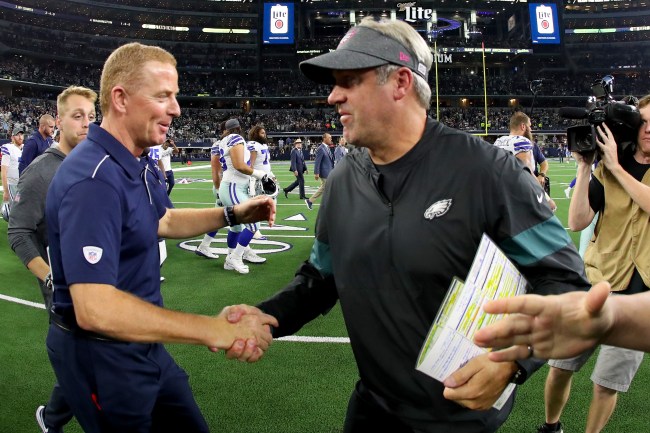 Doug Pederson: “We’re going down to Dallas and our guys are going to be ready to play and we’re going to win that football game, and when we do we’re in first place in the NFC East, we control our own destiny, we’re right where we need to be.”

Eagles coach Doug Pederson was asked after last night’s 37-10 loss to the Cowboys if it’s the teams worst loss since he became their head coach in 2016:

Doug Pederson was hoping making that making a bold prediction to beat a team who’s beat them five out of their last seven meetings was the inspiration the Eagles needed to jumpstart a sluggish first half to the season.

The Cowboys mushroom-stamped their NFC East division rivals 37-10, dropping the Eagles to 3-4 and allowing Dallas to take the division’s top spot.

After the game, Ezekiel Elliott, who finished with 147 all-purpose yards and a touchdown, had this to say about Pederson’s pompous prediction:

“We don’t need inspiration from him to go out there and play hard,” Elliott said, according to Pro Football Talk. “This rivalry is enough. Honestly, we don’t give a f—k what Doug Pederson says.”

Before the game, Cowboys defensive end DeMarcus Lawrence spoke about Pederson’s comments in an eloquent manner:

“Tell him to come on. We ready. Can he play the game? He might want to shut his ass up and stay on the sidelines. He can’t play the game for them.”

I look forward to the apologies from all the DeMarcus Lawrence doubters from last week. pic.twitter.com/RdtPHLPvTS

After the game, he doubled down:

"I feel like he got the statement today, so we're gonna go let him sleep on it."

At least the internet was kind to the Eagles coach. Oh, wait. Never mind.

Doug Pederson: We’re going down to Dallas, and our guys are gonna be ready to play. And we’re gonna win that football game and when we do we’re in first place in the NFC East.