Curt Schilling has certainly kept himself relevant since retiring from the mound. Just typing ‘Curt Schilling’ into the BroBible search field brings up the following articles:

In the wake of ESPN Jemele Hill’s calling President Donald Trump “a white supremacist” on Twitter, Schilling has been blunt and unwavering of ESPN’s perceived hypocrisy. In an interview with Fox and Friends, the three-time World Series champion called may of his former ESPN colleagues “some of the most racist people in sports.”

.@gehrig38: "Some of the most racist people in sports are on [@espn]." https://t.co/Uyt2AKHB5m pic.twitter.com/54DPGHkocT

“Her calling the president a racist, that’s no surprise,” Schilling said. “Disney and ESPN have stopped giving all pretense of objectivity and they support a very intolerant, exclusive, liberal progressive agenda. I think some of the most racist people in sports are on the station there now and they have a voice.”

After being suspended (and eventually fired) by ESPN for things like posting  a Twitter meme that compared Muslim Jihadism and German Nazis and sharing a Facebook post that many viewed as being anti-transgender, Schilling has made it his mission to expose the network. Last year, Schilling said:

“Some of the most racist things that I’ve ever heard come out of people that are on the air at ESPN. There are some of the biggest racists in sports commentating. And you take it for what it is. You know who they are. You know what they are.”

Props to Curt for repping a shirt you can get for $8.99 at a gas station off the Jersey Turnpike. 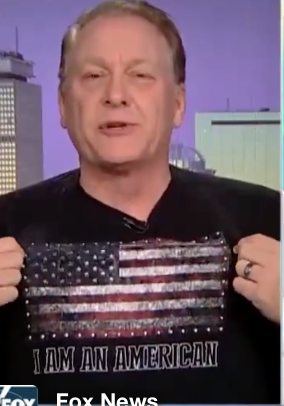