Cyclist With Balls Of Steel Breaks The Speed World Record By Hitting 174.34 MPH On A Bike 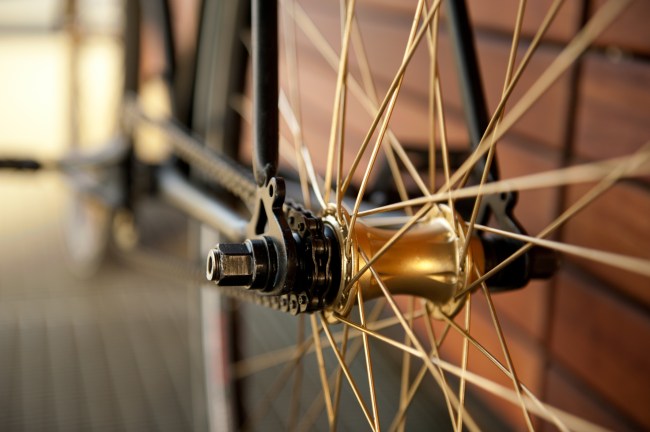 British cyclist Neil Campbell just set a new Guinness World Record after hitting a top speed of 174.34 miles per hour on his elongated bike that’s worth a small fortune.

This is a unique record because he didn’t pedal himself up to that top speed, he was assisted by a Porsche Cayenne, but he still needed stones of steel in order to hold on and pedal a frickin’ bike at a speed of over 174MPH. This is a ‘motor-paced speed world record‘ meaning it was on flat ground and he used a vehicle to help him get up to the top speed.

Rider Neil Campbell set the record last weekend at Elvington Airfield in North Yorkshire, England using his custom elongated bike that gives him extreme stability on the road. I cannot even begin to wrap my mind around what it must feel like trying to hold onto a bike at that speed. The vibrations must be out of control to the point that you probably can’t even feel your hands because they’re shaking so fast.

As you can see from the clips below, the Porsche Cayenne was outfitted with a special cage on the back that served several purposes. 1) It helped him get up to speed before a release was triggered at the 200m speed trap and 2) it allowed him to draft behind the car, blocking the drag from the wind. You can see how quickly his speed drops off the second he gets away from the car’s rear as the force of the wind shuts down his momentum.

Neil’s 45-years-old which seems pretty late in life to attempt a record as ballsy as this but I think he deserves even more respect for that. He described the experience as the “biggest rush you’ll ever experience” and I don’t doubt that for a second.

Neil Campbell’s new top speed Guinness World Record broke Dutch cyclist Fred Rompelberg’s 1995 record by a 7MPH which is a pretty sizable jump but it’s also incremental enough where I’m led to believe that other riders will attempt to break this record over the next few years.

Side note: you’d have to be INSANE to want to attempt this record. Strapped to a car and dragged along at 174MPH. If something goes wrong there is NO recovering from what happens next. There’s no shot in hell your body survives bouncing along the ground at 174MPH if you lose control. A lot of extreme sports records freak me out by this one seems more terrifying than most.

This record was years in the making for Neil Campbell. He left his job as an architect and devoted countless hours and tens of thousands of dollars to breaking this top speed record. Leading up to the weekend’s attempt he didn’t think they were going to pull it off. He told CNN International the test runs on Thursday and Friday were disappointing and “we went into Saturday not knowing anything, we had no idea what we could do and what was capable.”

His $18,000 bike was built using 3D-printed parts, carbon fiber chainrings, and it didn’t have a parachute attached to it in case of an emergency. If things did go horribly wrong in an instant, you’d want that parachute there to slow your body down as fast as possible but they were forced to ditch it in order to reach the new top speed.

What’s next? He wants to hit the 200MPH mark and do it at the Bonneville Speedway in Utah.